As far as we know, Peru is only rivalled by Tibet when it comes to high altitude dirt road touring. Which is why it’s depressed us a few times in Huaraz when we’ve had the following conversation with cyclists going north. ‘How’s Peru been?’ ‘Ah, not much fun – the main road from Cusco’s too busy with terrible drivers and lots of roadworks.’

There is an incredibly large network of small roads crisscrossing the Peruvian sierra (unlike, say, in Argentina or Chile where there are few options) giving almost unlimited route possibilities. We’re excited about seeing what these quiet, high roads will bring.

Having spent 2 months spiralling through southern Peru in 2010, getting no further north than Abancay. the plan this time is to head down from Huaraz to Abancay on back roads. It all depends on the weather though – those high passes won’t be much fun in the snow. We hope the weather will stay fine in October, but know we won’t be able to outrun the snows as far as Argentina, so expect to take buses from Abancay (Cusco, La Paz) to Uyuni and continue on bikes from there to Chile. Most of the time between now and February we’ll be on the Puna in Argentina, cycling to (and hopefully climbing) some big mountains. More about that later.

The biggest task before pedalling off into the wilderness is to plan our route in detail. Paper maps of the back roads in Peru are next to useless, and when we’re on the road in the mountains we don’t expect to find many road signs or people to help us find our way.  Where possible we’ve been spying roads on Google Earth  – most of the pictures for the Peruvian mountains have improved hugely since 2010 and are now clear enough to spot even small 4WD tracks. For the few areas where they’re not, we’ve been looking at the Peru Ministry of Transport and Communication electronic maps – the most accurate ones we know of on the web. The route planning has been Neil’s job. If we get lost, it’s his fault.

Haz has been in charge of getting our kit/tools/spares ready, and as usual on the road she’ll be in charge of repairs. First job before departure was to replace Neil’s worn back rim: 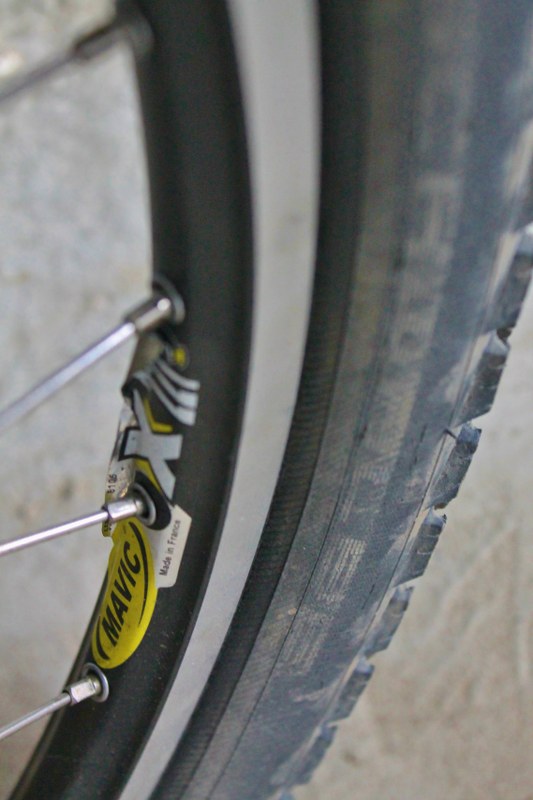 With a £12 Mavic from one of Huaraz’s bike shops. Wouldn’t have gone for it at home, but there wasn’t a whole load of choice out here. That’ll teach us for forgetting to get new rims back in the UK, when we had the chance.

Then the bikes were spruced up… 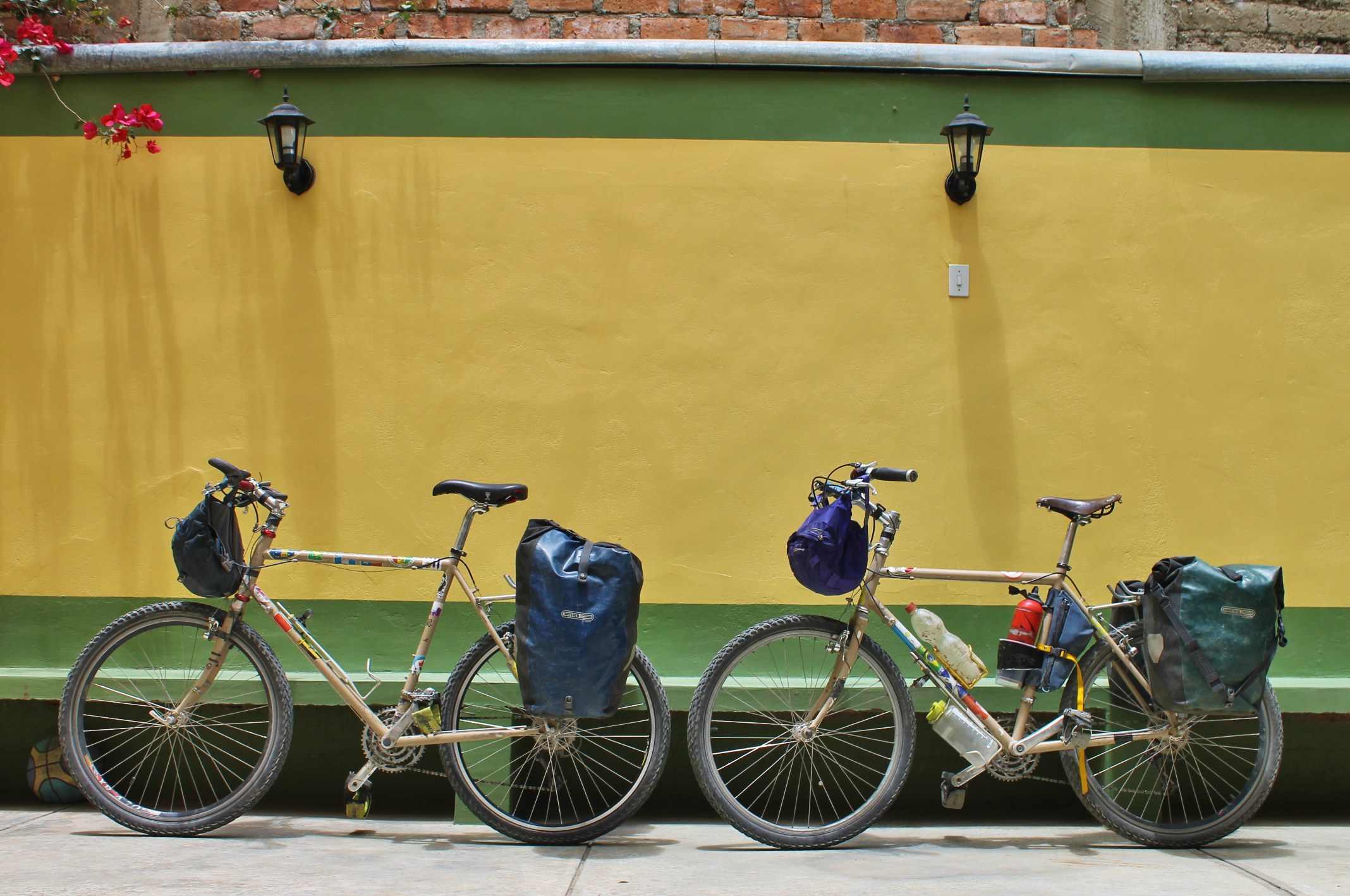 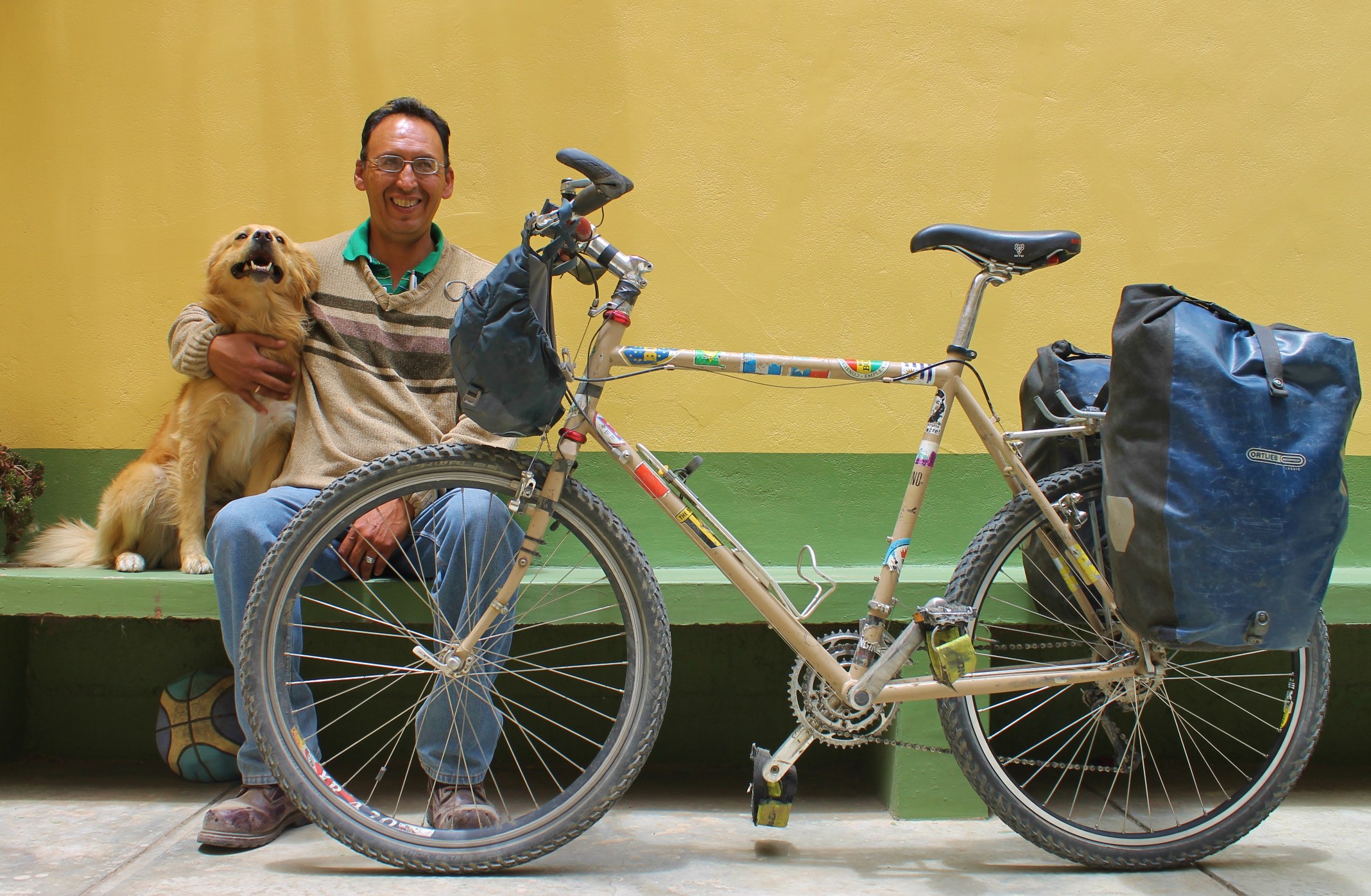 This is Fredy, our landlord for the past 5 months, and a lovely man. Next to him is Greco – the world’s worst guard dog. When Fredy and wife Diana are away from home he’s as meek as anything. When they’re at home, Greco attacks us at every opportunity. So far the battle scoreboard reads: Greco 2 Harriet 0. Greco 1 Pike 0. Pike has tried to kick him in the head about 50 times, but the blighter ducks and dives better than Mohammed Ali. Then bites your calves when your back’s turned…  Just look at those fangs! 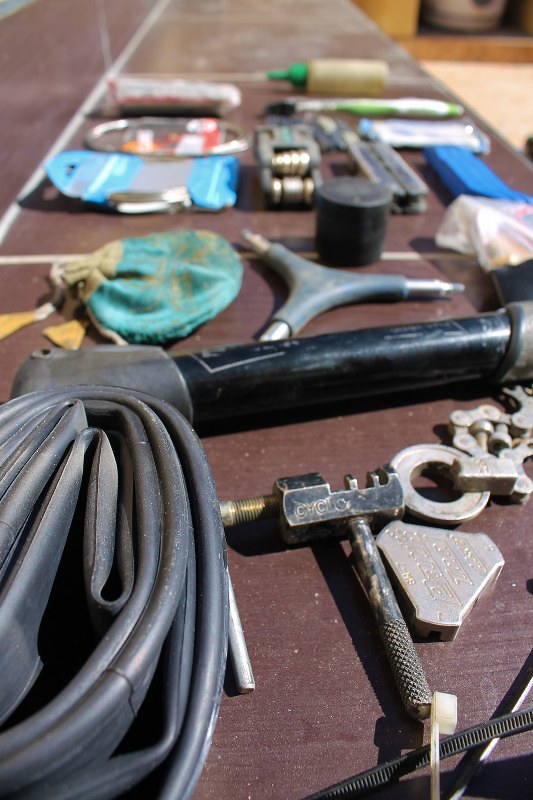 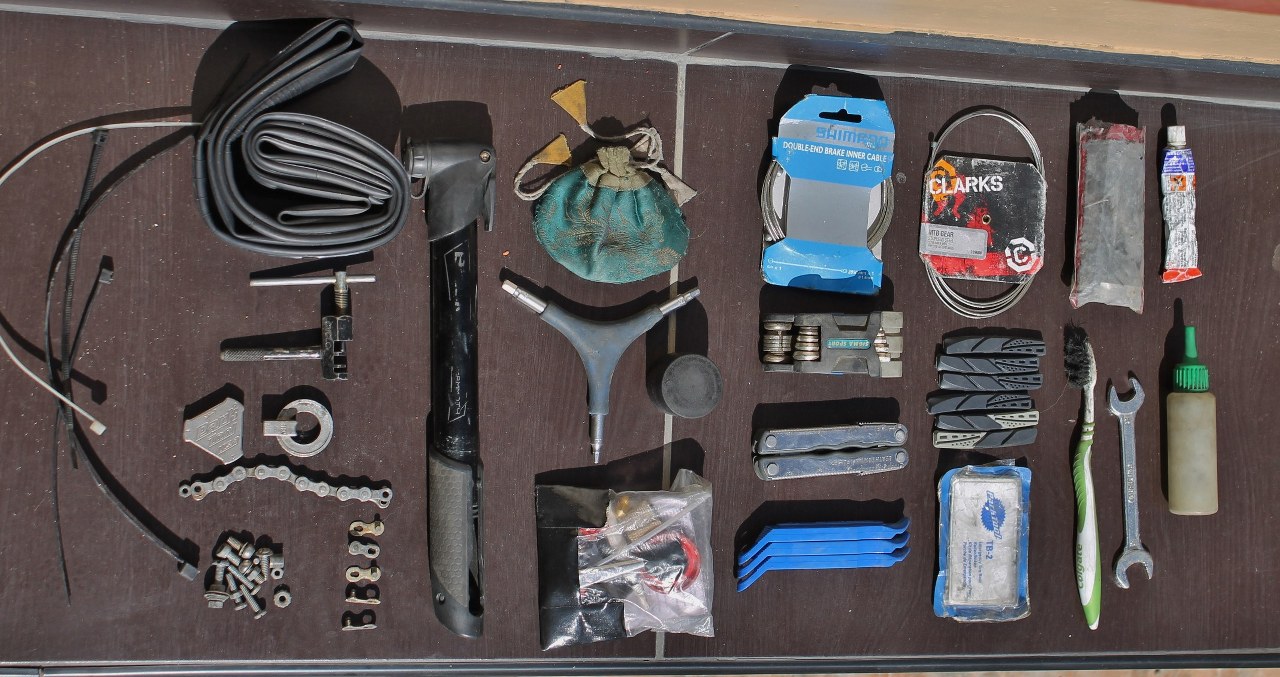 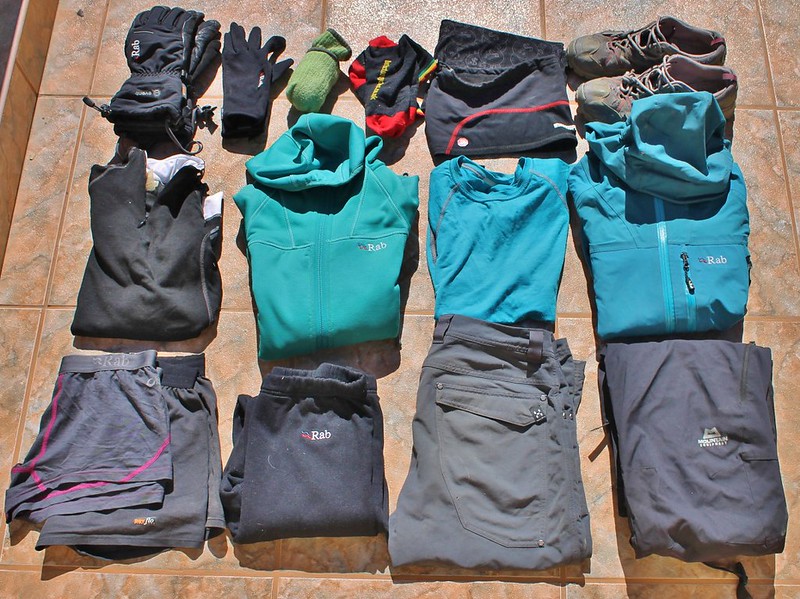 Hopefully Haz will be warm enough with all these for the route through Peru. 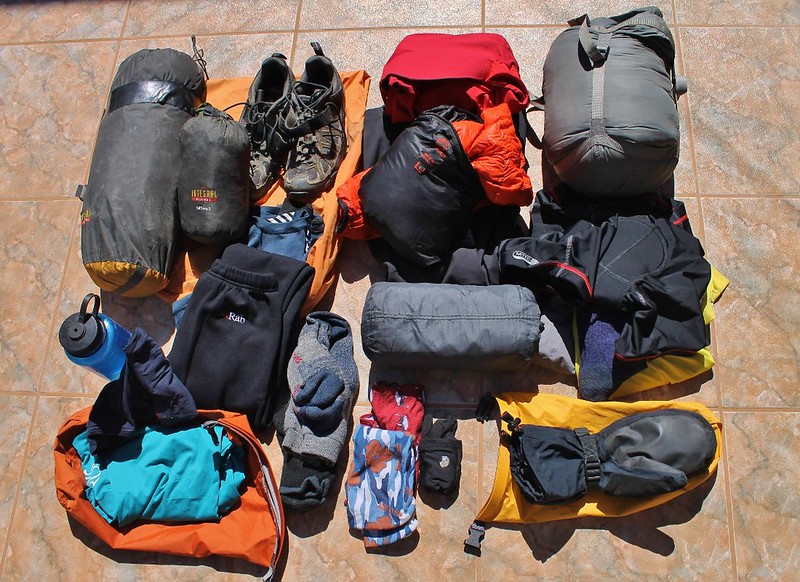 The contents of Neil’s panniers. 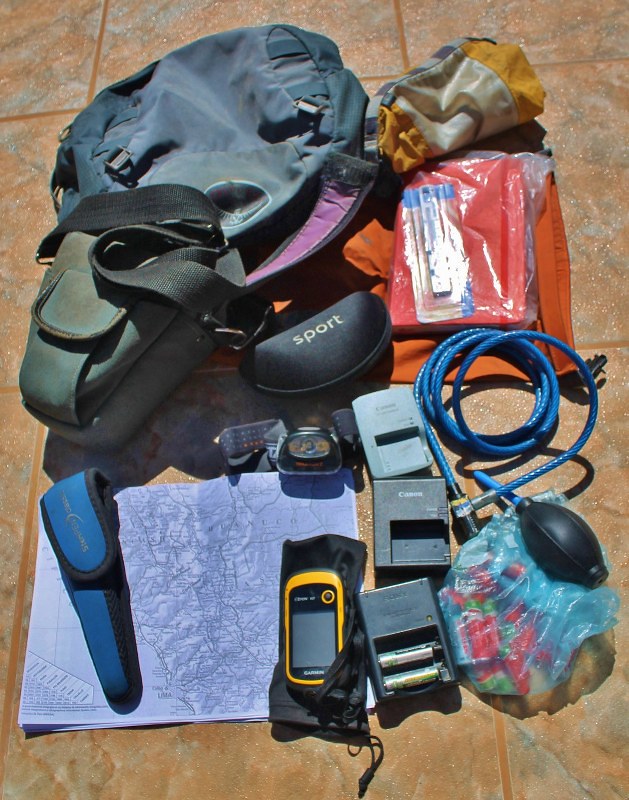 And here’s what’s in his front bag/Osprey pack lid. The thermometer falls within the ‘essentials’ catergory and so gets to come on the bike to Abancay. Most clothes do not. 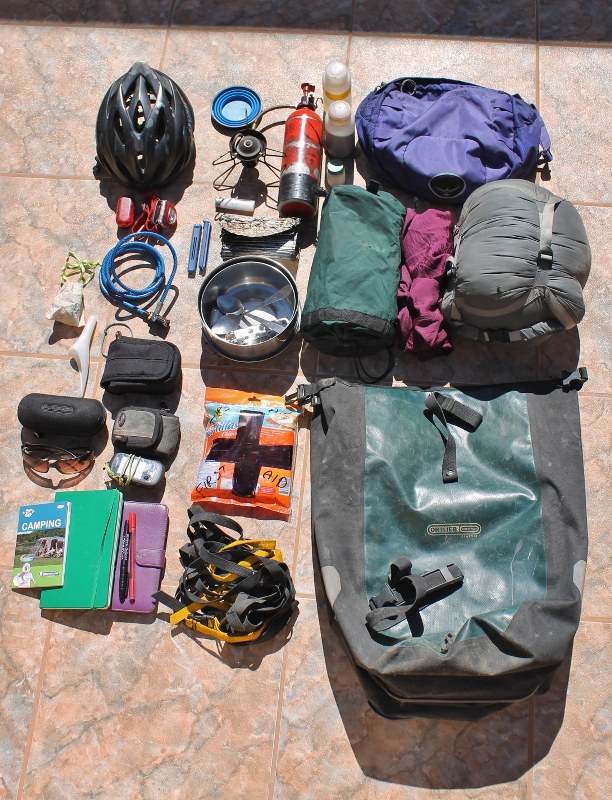 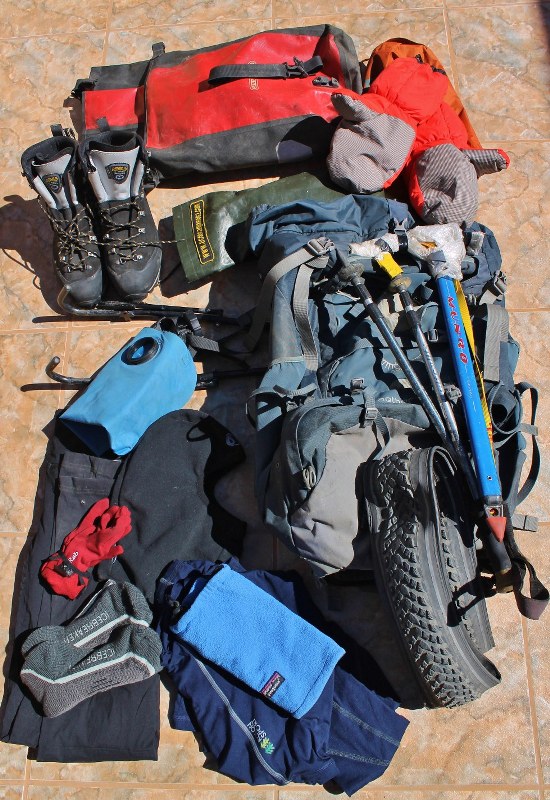 Neil’s mountaineering kit and front panniers/rack for the Puna. Adds a good 10kg to the bike, so it’ll be nice not having it for all the passes we’ll be crossing as we head south through Peru. 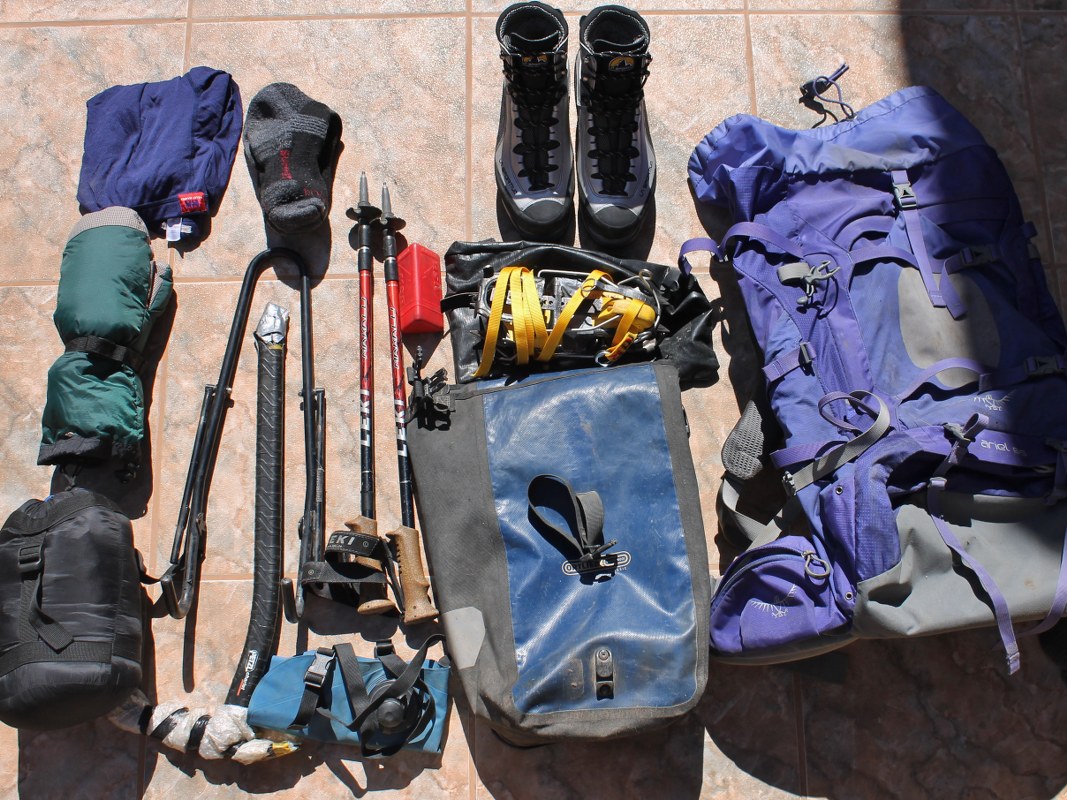 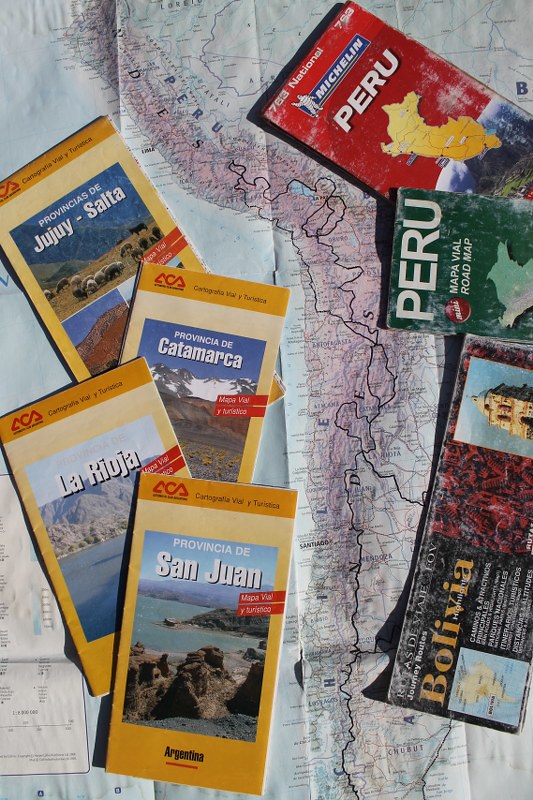 Sadly even all our lovely maps are too heavy – we’ve photocopied the bits we need. Along with these we’re leaving behind lots of downy goodness that we hope won’t be needed on the Puna (it won’t be much below -15C, right?), as well as plenty of non-essentials like non-outdoor clothes, which we had the luxury of bringing to Huaraz. 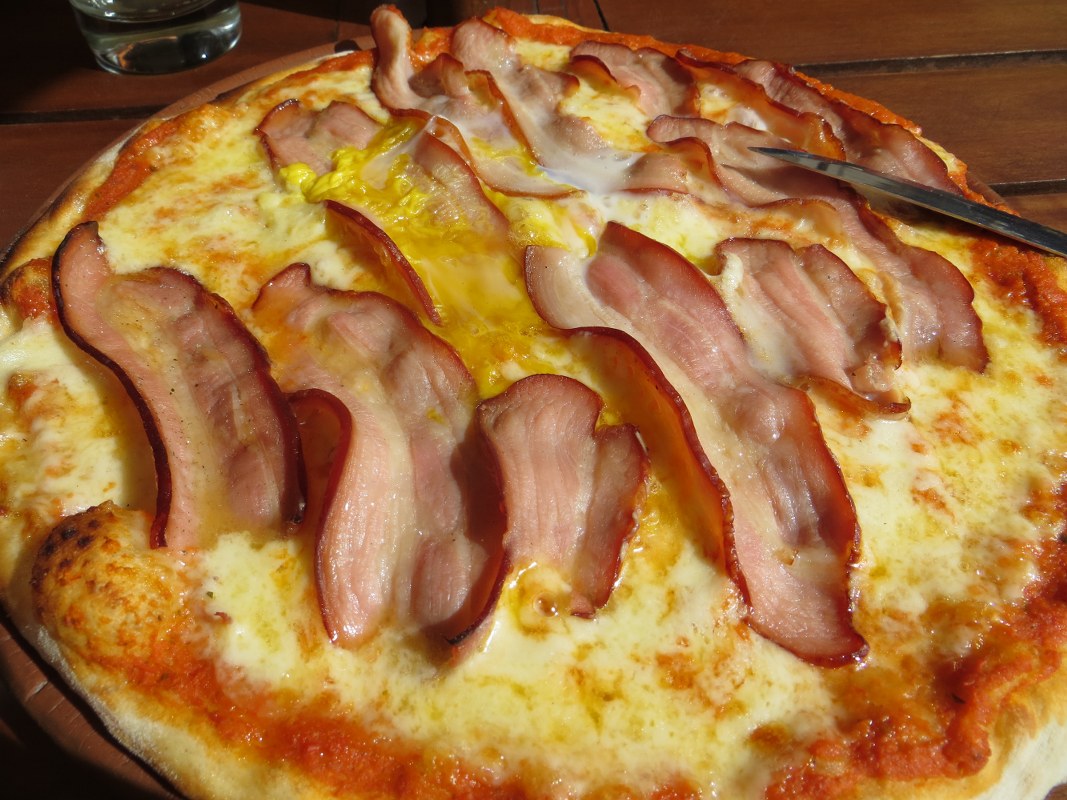 The campesina. Enough bacon to keep us pedalling for a few weeks… 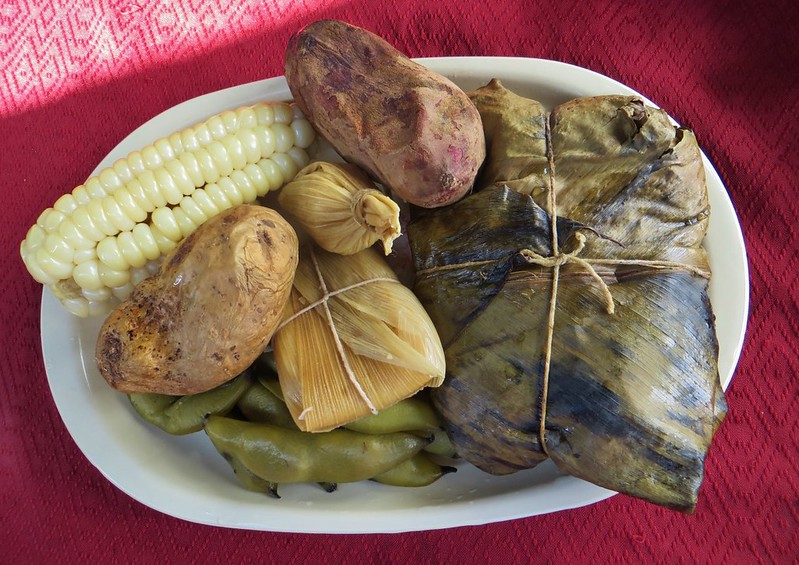 Will check in again when we find internet, though we can’t guarantee this will be before Huancavelica – the first big town on our route, and some 850km of cycling away.