Huaraz lies in the Rio Santa valley, or Callejon de Huaylas, flanked to the east by the majestic Cordillera Blanca, and to the west by its uglier, squat little brother the Cordillera Negra. Both are a paradise for bikers. Climbing up into the Blanca affords close up views of the mountains, but never more than a few at a time. Venturing into the Negra treats you to spectacular panoramas of the peaks in the Blanca as you fly down the singletrack back to town.

To aid our acclimatization before heading out to the high stuff we introduced our bikes to both ranges on some gentle day trips. The weather didn’t always behave as we wished, though the sun occasionally popped out from behind a cloud to light up the 6,000ers and burn our pasty Anglo Saxon noses. 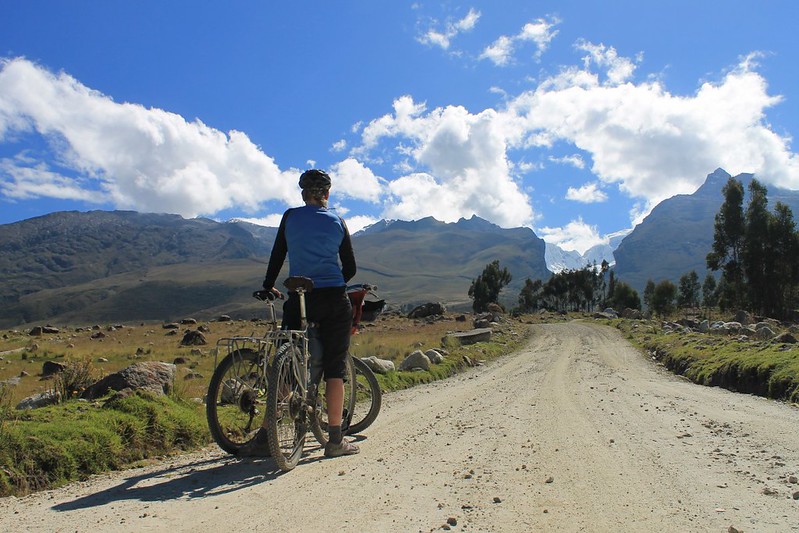 Into the Blanca. Icy peaks in Quebrada Cojup ahead. 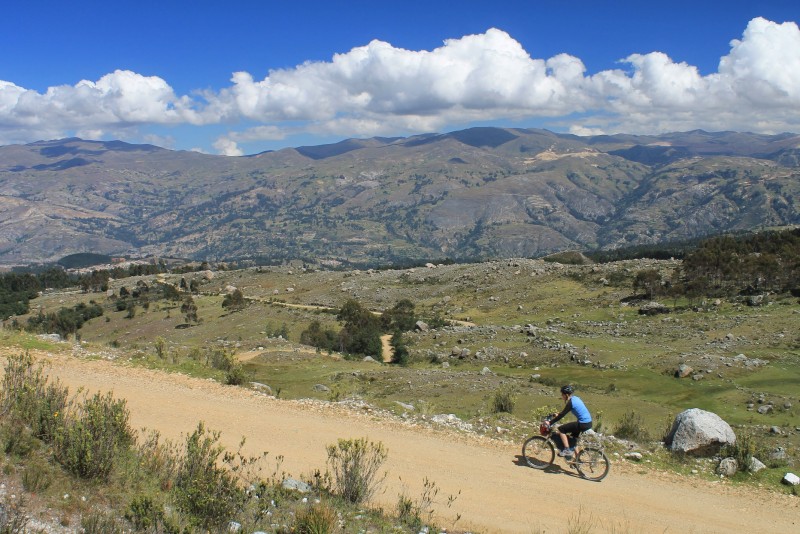 Climbing into the Blanca above Huaraz. Cordillera Negra in the background. 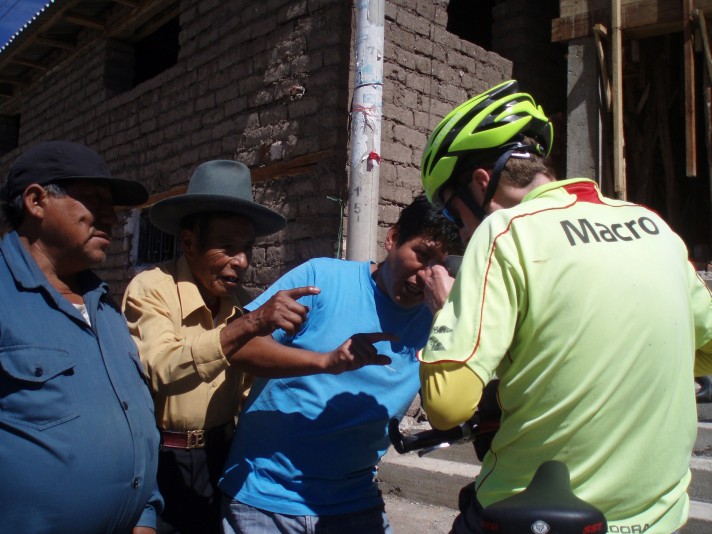 In Huanja, where we happened upon a fiesta. ‘Drink our beer or…’ old guy draws finger across his throat. These two were very insistent we each drink a whole glass, hence the vehement pointing of fingers! 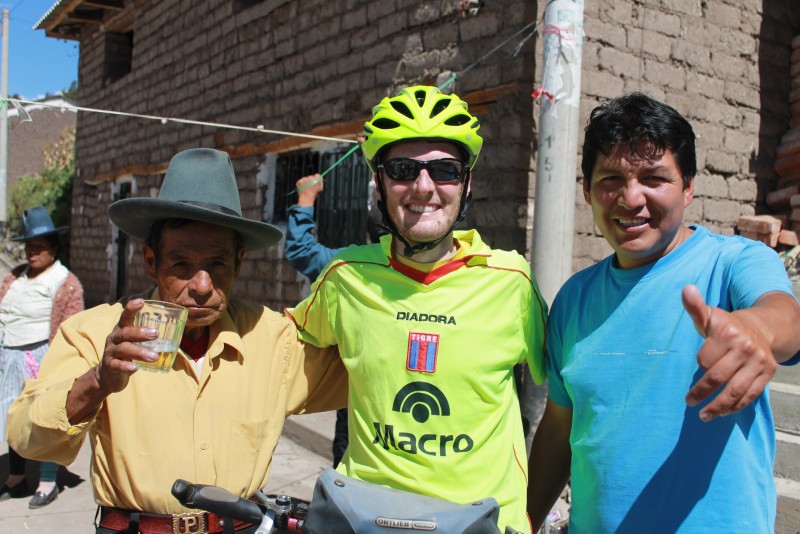 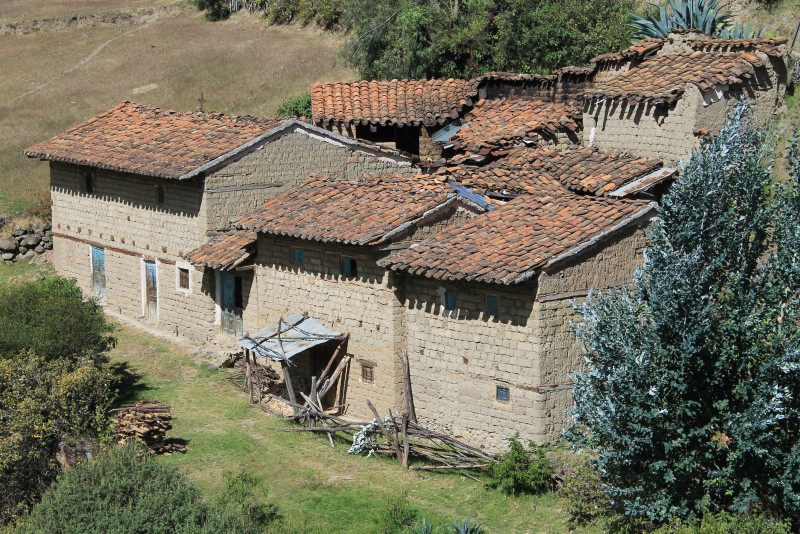 Some traditional adobe and terracotta housing in the Negra. 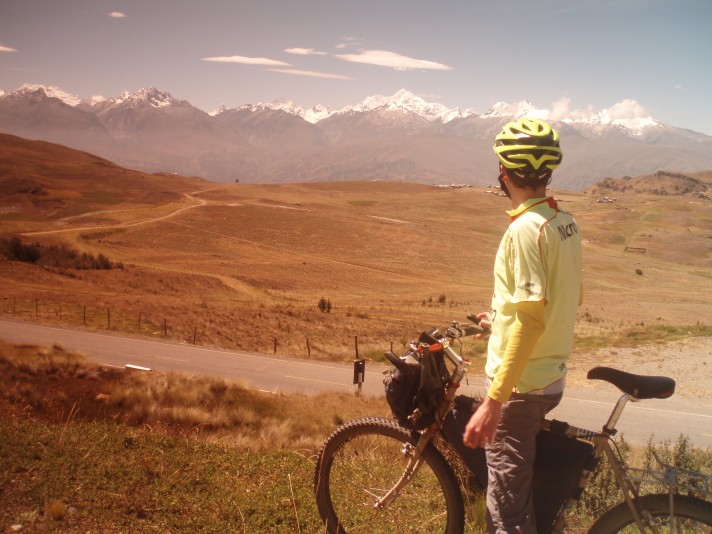 Climbing on the paving up to Punta Callan (4,200m). Some hi-tech photography skills employed here: sunglasses. 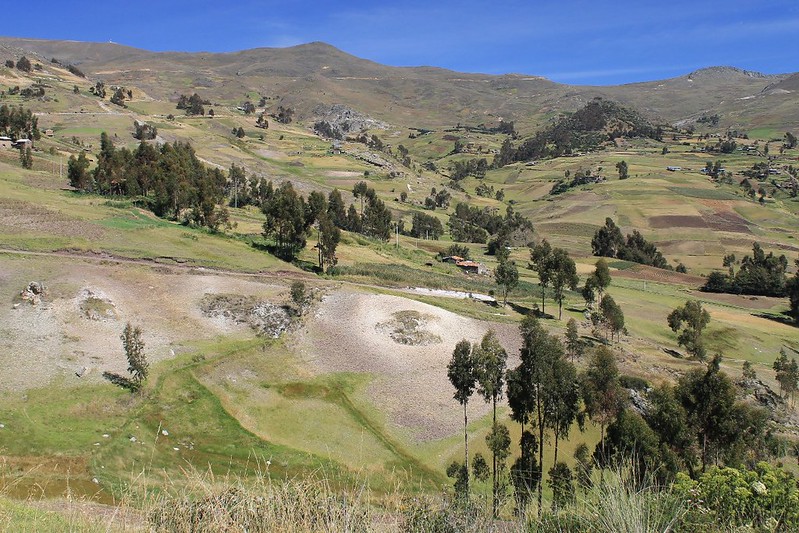 The Negra. Though ‘Cordillera Verde’ would be more appropriate in May. 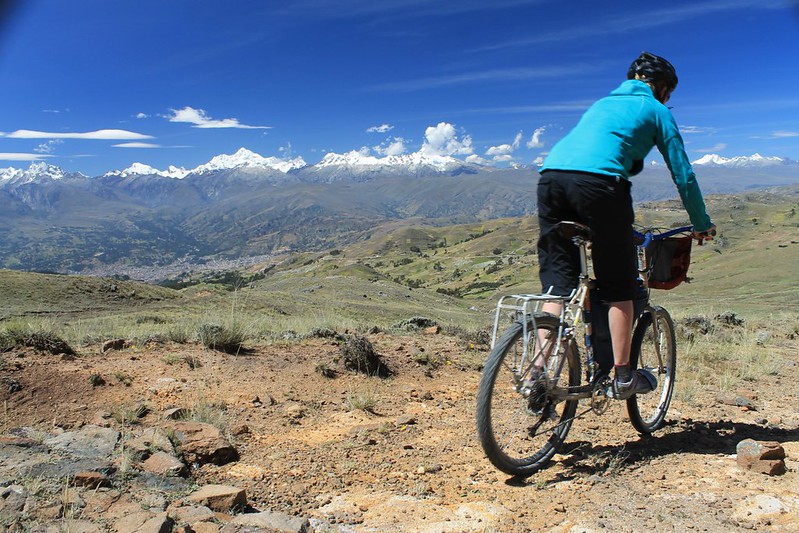 Descending from Punta Callan in the Negra. What apperared to be a track on Google Earth  turned out to be a wide, pre-Inca trail. 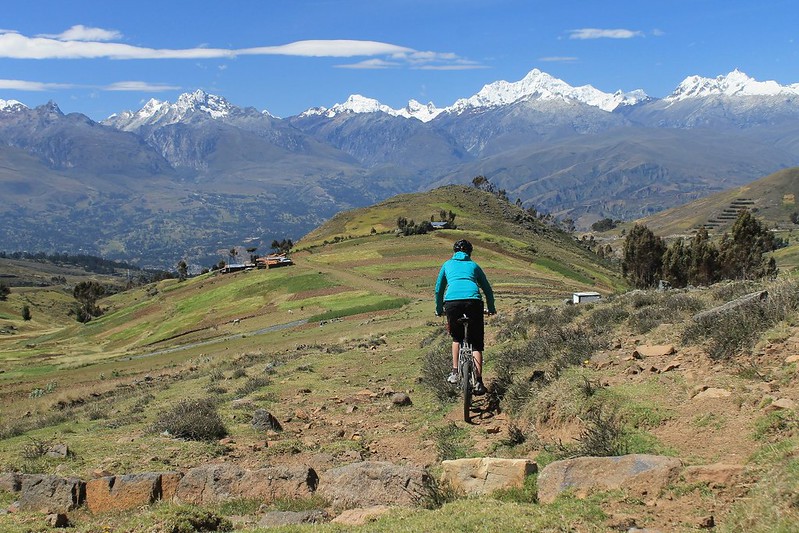 Descending to Huaraz. Huantsan (6,369m) is the high peak above Haz’s head. 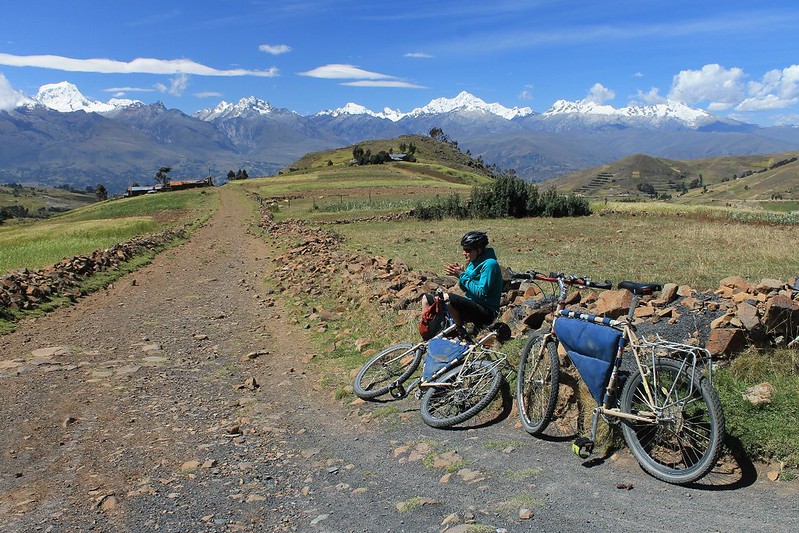 Back on track. Taking a rest from the Negra singletrack. 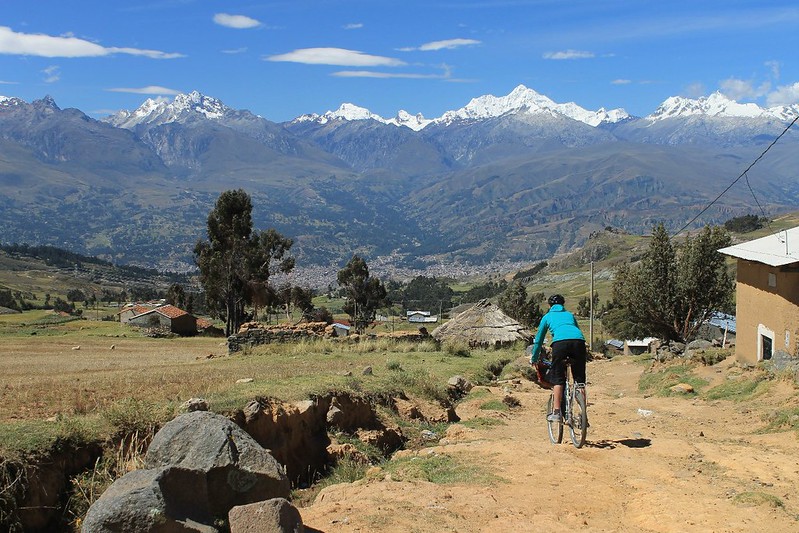 Descending through Negra villages. Not much traditional architecture on show here since the 1970 earthquake, though there is still some roof tiling and adobe about. 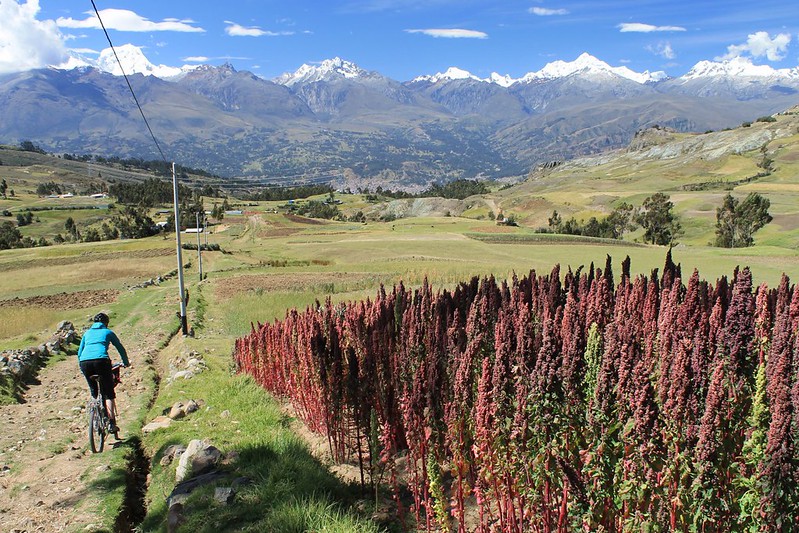 Flying past the kiwicha. A high protein grain, related to quinoa, that is used extensively in Andean cooking. 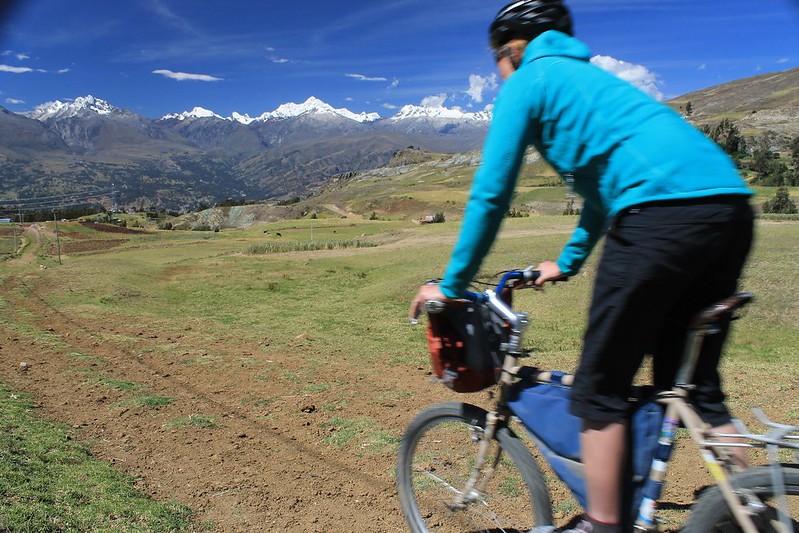 Zooming back to Huaraz. 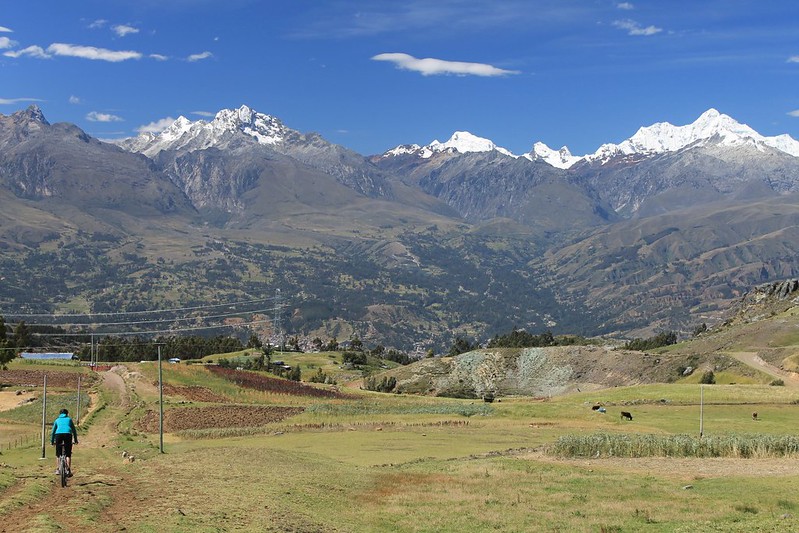