We cycled through PN Sajama in late July, but didn’t have time to climb any of the moutains before having to rush to La Paz to pick up Peter. This done, we cycled back to Sajama via PN Lauca in Chile, quickly organized a guide and transport and headed to the Payachata volcanos.

By Bolivian standards the 800Bs (U$115) charged in Sajama to hire a jeep for the return journey to Parinacota ‘base camp’ is a rip off, but we were short of time and cycling the 27kms on a very sandy road would have meant Peter missed his return flight to London. So we jumped in a 4×4, driven by a 13 year old, and were at the car park that comprises base camp within an hour. From there it was a 90 minute walk up to the high camp near the col between Parinacota and Pomerape at 5,140m, with a porter carrying up for us 4 days’ worth of water. 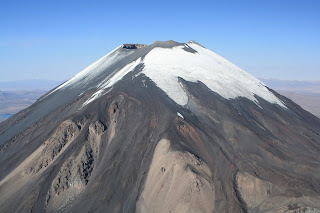 This was the highest mountain we’ve tried to climb, but it turned out not to be too difficult.
We left at 03:00, when the temperature was a pleasant -1C, and climbed up steadily on the path that leaves the high camp heading W. As the mountain is climbed frequently the path is distinct and soon this is zig-zagging up the northern slopes of the mountain.

When we climbed there was very little snow, so the path peters out at where the snowline normally is, however from this point it is very obvious where to go and the remainder of the hike is simple. 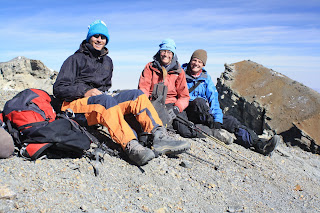 We arrived at the lower of the N summits (6,346m) and then carried on the the point slightly to the W as it looked a bit higher. It was, at 6,351m. We stopped here even though the true, NW summit was further W round the crater rim, as we thought it was wise to save some energy for Pomerape the following day, and as Peter had stopped on the first summit and didn’t seem too keen to continue further.
The views into the huge (about 300m deep) summit crater were impressive, but it would’ve been even nicer with a bit more snow around. As the weather was perfect, with no wind, we were able to stay an hour on the summit enjoying the views and the high altitude.
The descent was generally easy, on scree, though Peter was very tired by this stage and Ignacio ended up attaching him to a leash just in case he tripped on the steeper parts. We made it back to camp in 3 hours, 10 hours after setting off.

Pomerape
After resting 12 hours at high camp our alarm went off at 01:00 and we were off just after 02:00. After the previous day’s exploits Peter didn’t fancy another trip up a mountain, so he remained in bed while we set off with Ignacio.

It was an hour and a half walking on rocks and sand until we reached the base of the glacier at 5,400m that leads up towards the summit. Here we put on our harnesses and crampons, roped up and began climbing up the glacier. It was an enjoyable climb – the glacier was reasonably steep, but not too steep at about 40-45 degrees the whole way. The snow was mostly in good condition with only a few slightly icy patches, and we made decent progress, finding ourselves at 6,000m by 06:00.
Here things began to become more complicated. The snow turned to ice, but as it was only at about 30 degrees we were able to continue upwards to 6,128m. Here we were at the base of a rock wall, and initially Ignacio said we might climb up this, until we realised that it was littered with lots of loose rock that would have made it too dangerous to attempt. The usual route from this point is to skirt round to the left of the rock and climb up a 60 degree snow slope, but with so little snow this season this route was all hard ice.

Looking at it we didn’t think we’d be able to climb it, and eventually this proved the case, but we had a quick try anyway. Ignacio traversed across 40m of ice and secured a line for Haz to make her way across, while Neil sat in the cold for 45 minutes anchoring the other end. When Haz made it across the traverse and saw the 100-150m of 60 degree ice climbing that awaited afterwards we made the decision to turn back as we knew we weren’t confident or competent enough to try and climb up this.

It had been a good adventure though, and it was nice to finally use the crampons that we bought in Mendoza and had been lugging around on the bikes for 4 months!
It took 3 hours to get back to high camp, Ignacio placing anchors and us abseiling down most of the glacier. All great fun.
We were back in Sajama in a few hours, and there had a well earned 2 day rest before setting off for the big one – Sajama itself.