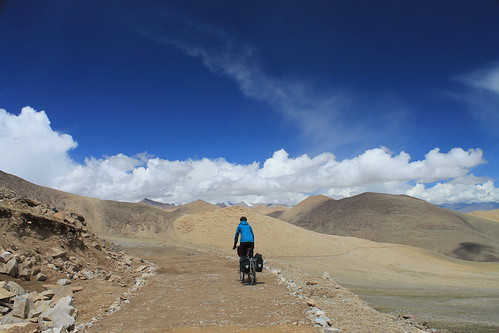 As far as we know, this is the highest pass you can cycle up to in India. (The Marsimik La is higher, but we tried getting permission for that by writing to and then meeting the DC in Leh, but he told us it was beyond his authority and that we had to contact the Ministry of Home Affairs in Delhi, which we couldn’t be bothered to. So if you’re desperate to get there, try that bureaucratic route.)

We’re not sure if officially foreigners are allowed to the Kaksang La either, so it’s best not to run into any border police en route, but there are no checkposts between Mahe and the pass. The cycle up from Mahe, over the Hor La and then up to the Kaksang La is fantastic. The scenery is wonderful, the only traffic is from roadworkers improving the top section of the road, and the surface is fine except for where it’s being worked on. The gradients are often so gentle that on the descent it makes much more sense to just fly down the shortcuts. One of our favourite passes in India.

One thought on “Kaksang La”