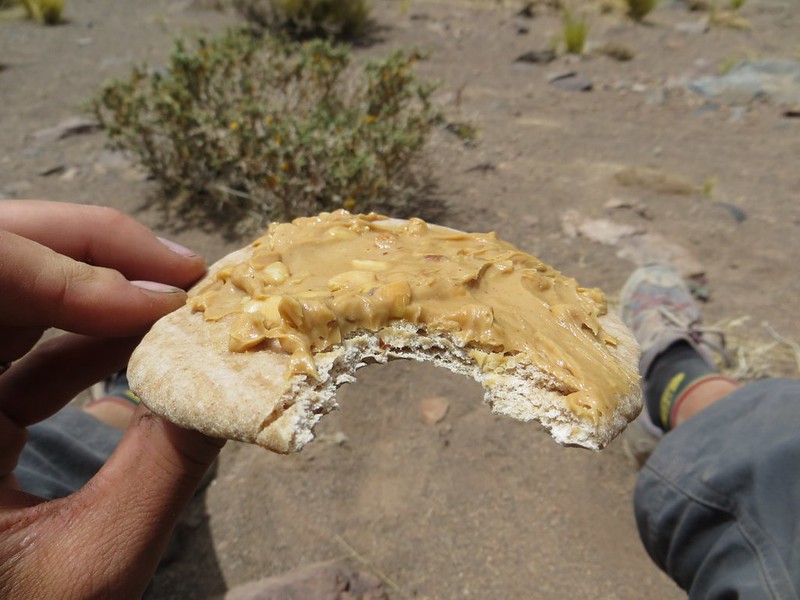 Food has played an essential part in this trip. On our first trip to the Puna we didn’t put much thought into it beforehand and ended up eating mush for weeks. This was incredibly bad for our (well, mostly Haz’s) morale and meant that by the end we were very eager to return to civilization. This time experience taught us to eat better when we’re up top. Below is a list of all the food we carried on the various parts of this trip and an outline menu. But first, here are a few things we’ve learnt along the way:

Salami, salami, salami (and maybe a bit of olive oil)
Salami is packed with calories and is incredibly morale boosting. Take as much as you can carry! We really looked forward to our salami and mash meals as they broke up the pasta monotony. Olive oil is also very high in calories and much improves instant mash. Look out for sensational, and cheap, local olive oil in Fiambala. 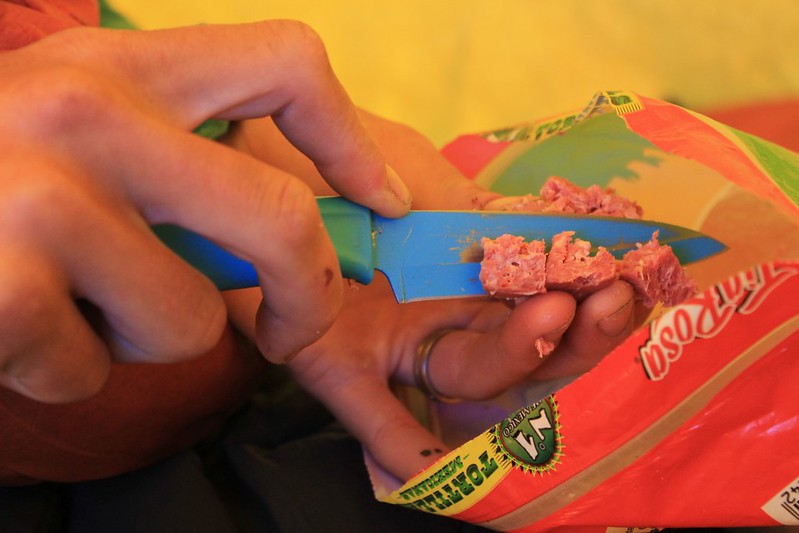 Angel hair pasta is gross!
At altitude water boils at a lower temperature and as a result pasta takes much longer to cook. It also cooks more unevenly, going mushy on the outside while remaining hard in the centre. It’s worth buying the more expensive brands of pasta, such as Lucchetti, as they don’t go as mushy. Pasta shape is also important. You need something that cooks fast to save fuel however angel hair, which cooks the fastest, ends up a squidgy and incredibly depressing mess. The shape known as espirales in Chile and tirabuzon in Argentina is our favourite.

Dry veg in the sun
This is like witchcraft! Take 1kg of carrots, slice it finely, leave it in the hot Andean sun for a few hours (watch out for the afternoon winds) and you end up with a few hundred grams. Throw the dried veg in with your pasta water and watch it grow back. 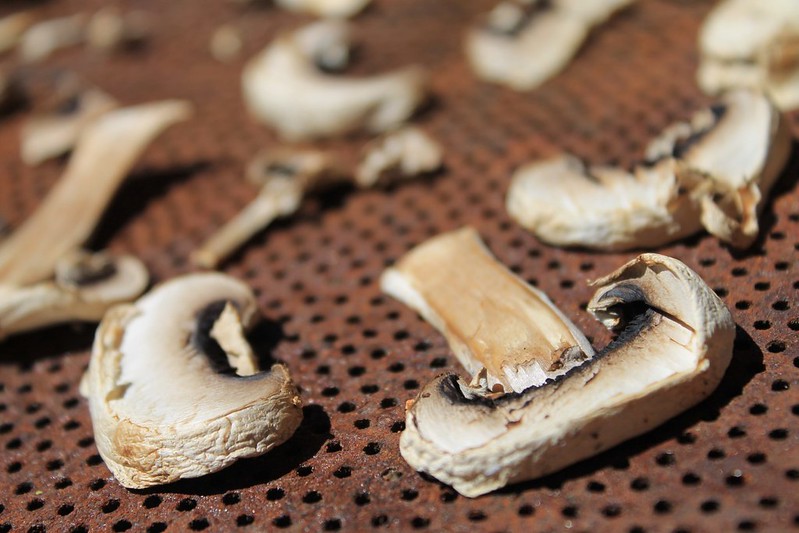 Re-use your pasta water
When water is scarce on the Puna, throwing away your pasta water doesn’t make sense. We use ours to make pasta sauce with soup powder or if we are using a pre-made sauce then we save the water in a Nalgene bottle to make our porridge in the morning.

Drybags make great air tight Food Containers
We like to store our oats, mash, bulghur, trail mix, and noodles in roll top dry bags or zip lock bags. The food takes up less room like this and you don’t end up carrying lots of rubbish around.

Breakfast
100g of oats each (usually made into porridge) accompanied by 500ml coffee. We only took 80g each during Part 1, but upped the ration when Neil complained he was being starved.

Lunch
Either bread, wraps or pitta with chorizo, jam, peanut butter or dulce de leche.
Or 125g each bulghur with chorizo/salami, garlic, oregano and olive oil.
Or 1/2 pack Fruitigran biscuits each.
Or Hogareñas wholemeal crackers with dulce de leche, or cheese spread.

Supper
Either pasta with soup powder. Laced with parmesan, garlic, oregano and merquen to taste. (This is the lightest meal option, and so the one we most commonly ate. We came to dread it.)

Or instant potato with chorizo/salami, garlic and olive oil.
Or instant noodles (however, these are not on sale in Argentina, and Chilean instant noodles are worse than any we’ve ever tasted.)
Or pasta with a pre-made sauce (heavy, but we carry a couple as a treat).

Snacks
Chocolate (we gave up on this after the first stage as it kept melting in the desert).
Trail mix (half peanuts, half raisins).
Biscuits (Don Satur bizcocho is best as they don’t crush easily and are chocka with calories).

Water
We usually consumed 3.5-4 liters of water each per day. This was calculated as follows:

Food Carried (between us) 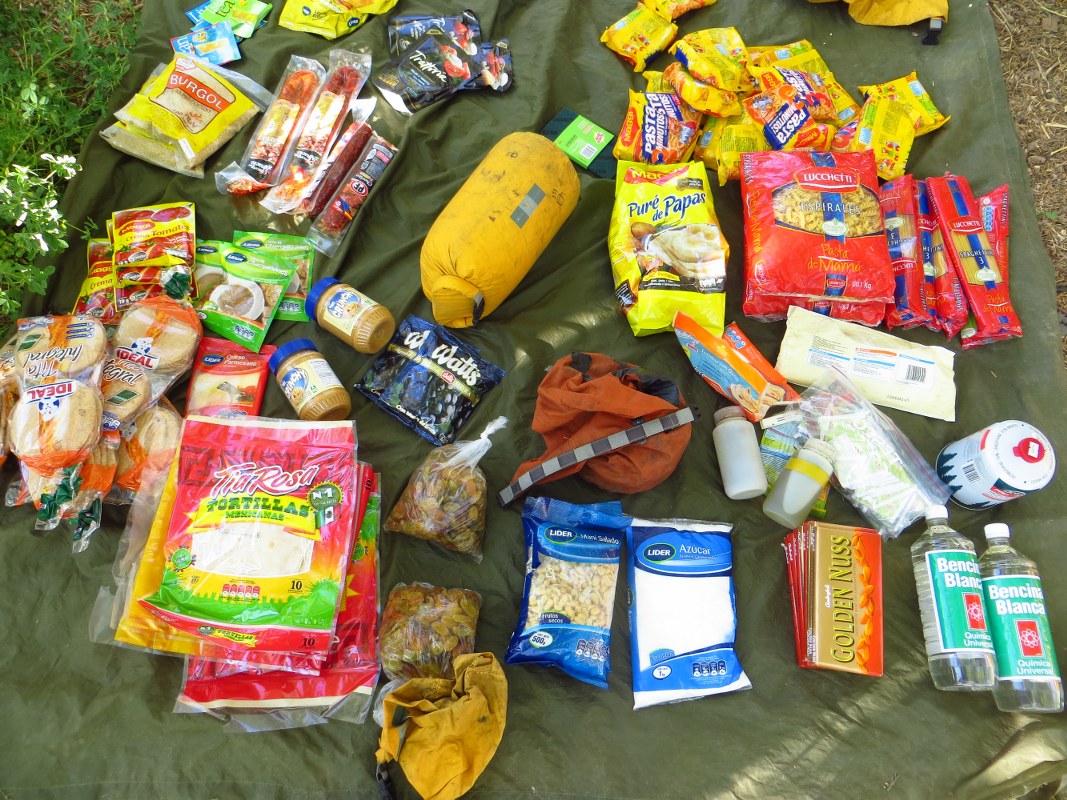 TOTAL 28.5kg. (For Americans, Liberians, Burmese and old people this equates to about 63lbs.) 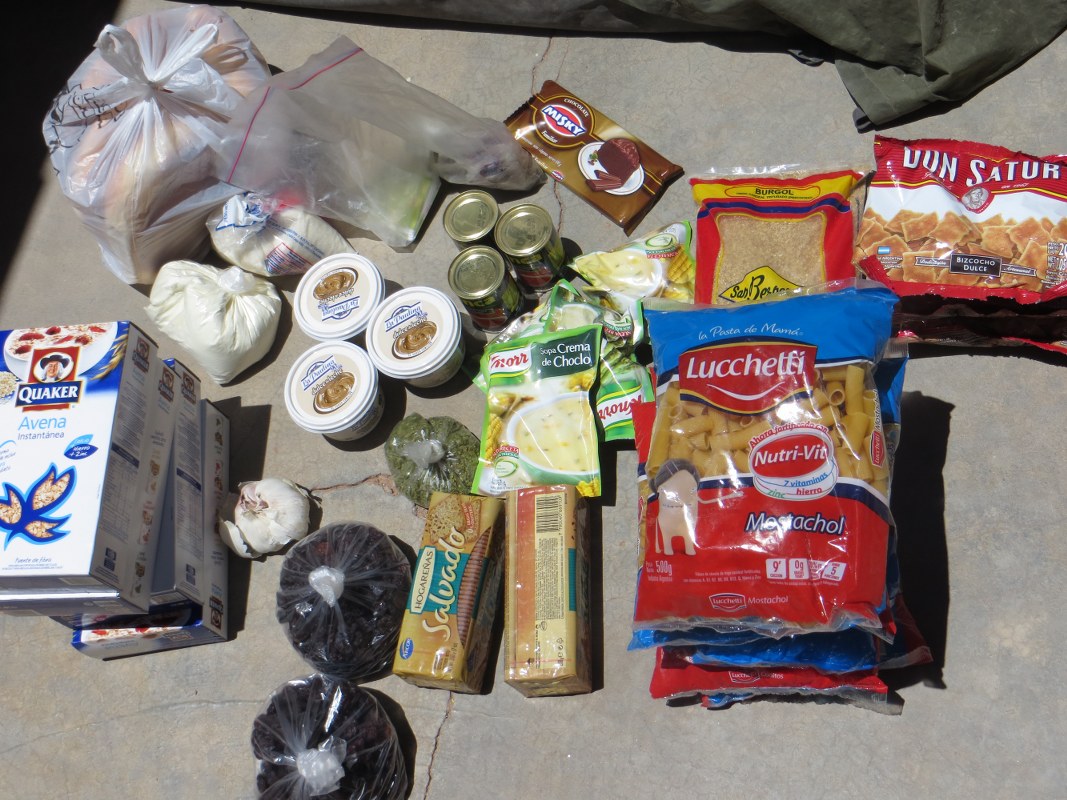 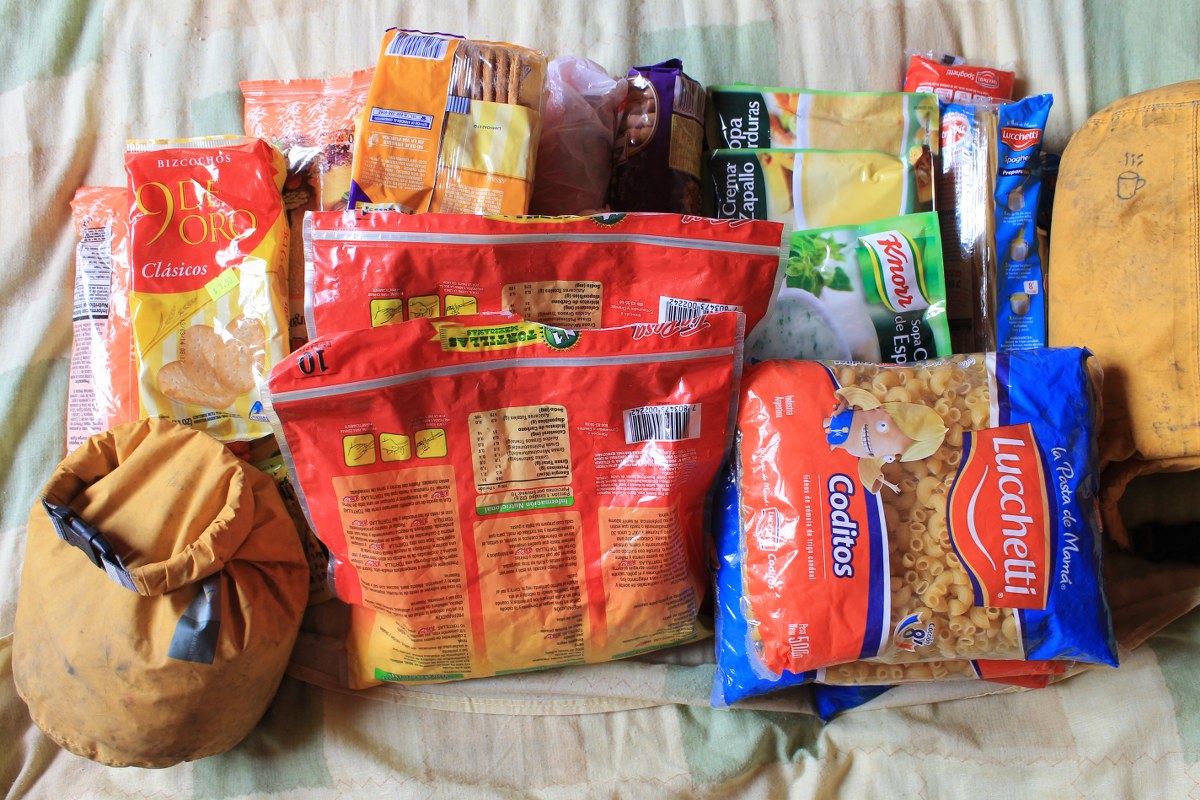 We learnt the hard way that foxes can open or rather rip into dry bags. Jonson reccommends that if you leave food depots you dig a hole, line it with rocks, place the food in a strong bag in the hole and then weigh down with rocks.