Bikepacking: backpacking with a bike. Somewhere between mountain biking and cycle touring, bikepacking comprises overnight trips on singletrack and testing dirt roads. Though a conventional cycle touring setup with panniers is possible, it makes carrying and pushing more difficult, so a world of gear geekery has sprung up – a new amusement for Haz to immerse herself in.

Inspired by some of Cass’ exploits, we embarked on a week-long circuit in the southern Cordillera Blanca. Armed with a tarp for shelter and no stove, all gear could be snugly squeezed into back-rack dry bags and frame bags. Oh so different from our last ventures onto trekking routes, lugging 25kg of kit over 5,000m Ladakhi passes.

Revelling in the freedom our steeds’ new setup afforded we pedalled, then pushed, the trails from Olleros to Chavin. As is often the case on such trips, overcoming poor mental preparation was our biggest hurdle. Unanticipated dreich weather toyed with our fragile little minds on the unexpectedly long push to Punta Yanashallash.

Later, an unused road above Chavin provided gloriously steep climbing up onto inhospitable puna, where basic adobe thatched huts were the norm and oilskin ponchos de rigeur. Completing our loop to Huaraz was the fabulous and popular ripio to Pastoruri, on a variant which involved carrying bikes through ichu grass into Quebrada Queshque.

An interesting experiment, soon repeated on a one-nighter to Quebrada Rajucolta, but there’s still much work to do to refine our carrying/pushing techniques! 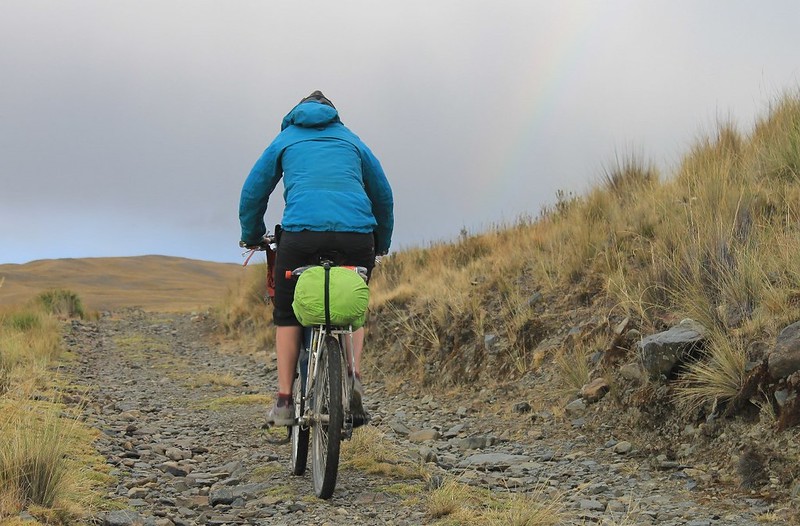 On the jeep track to Sacracancha. From Olleros to this camp there’s a rough jeep track that’s all rideable. Then the pushing begins. 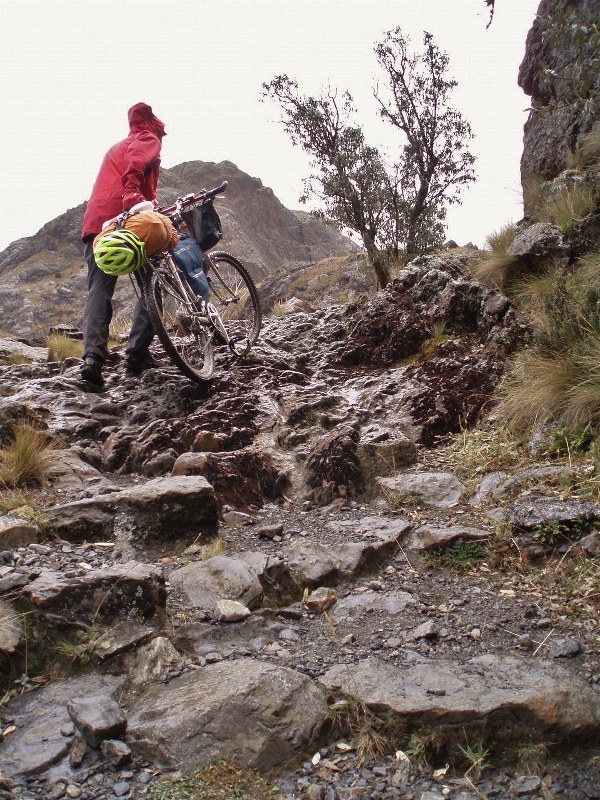 Into the driving rain. Our new setup ran like this: rear dry bag (sleeping mat, sleeping bag, tarp), frame bag (extra clothes, waterproofs and tools) and front bag (Osprey pack lids, filled with camera and miscellaneous important gadgets and notebooks). All worked quite well, except the weather wasn’t playing ball. Those of us who saved weight by leaving waterproof trousers and big gloves at home had some uncomfortable moments. The first 2 nights under the tarp it snowed on us too. Not in the plan! 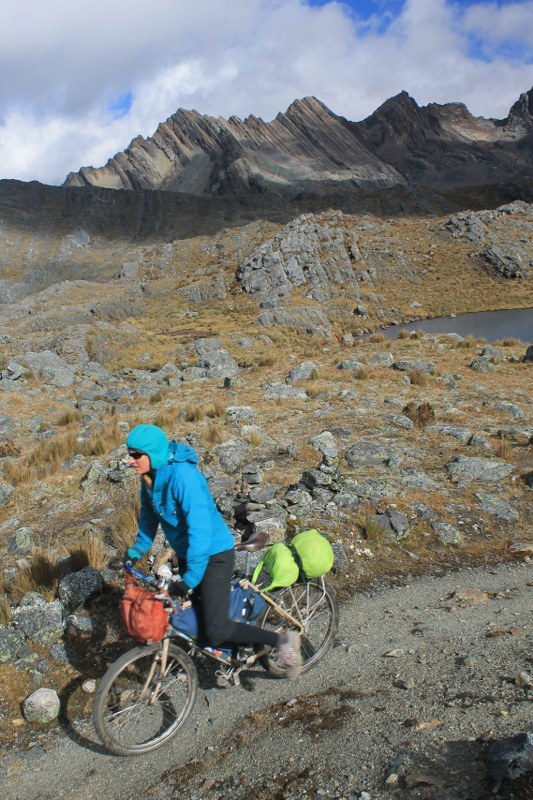 Reaching 4700m Punta Yanashallash after hours of pushing. On this push into a headwind and driving rain, we questioned what the hell we were doing. Then the sun came out, the descent was just about all rideable, we found cable TV in Chavin to watch Muzza win Wimbledon. All was well with the world again. 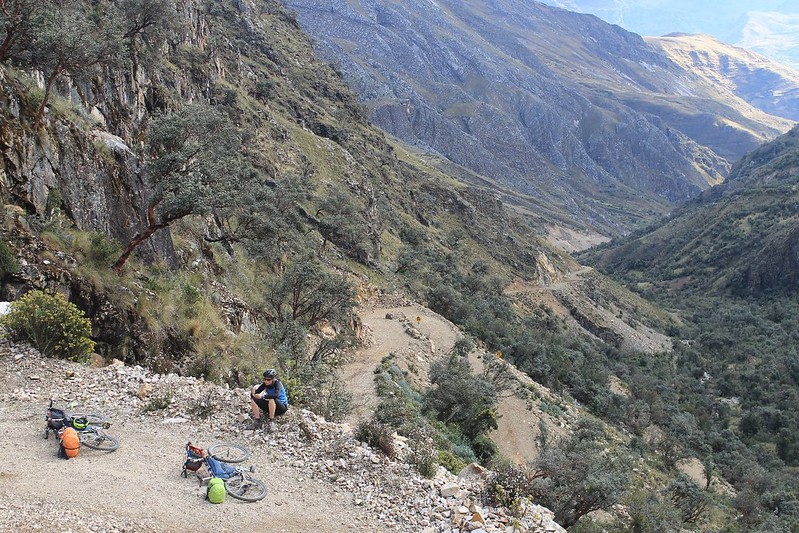 The steep climb above Quercos. After the excitement of the Wimbledon final we left Chavin late and ascended the dirt road towards Huallanca. 18km (including some downhill) later we camped, having climbed over 1300m. At an average of 7%, this was our second steepest daily climb ever. 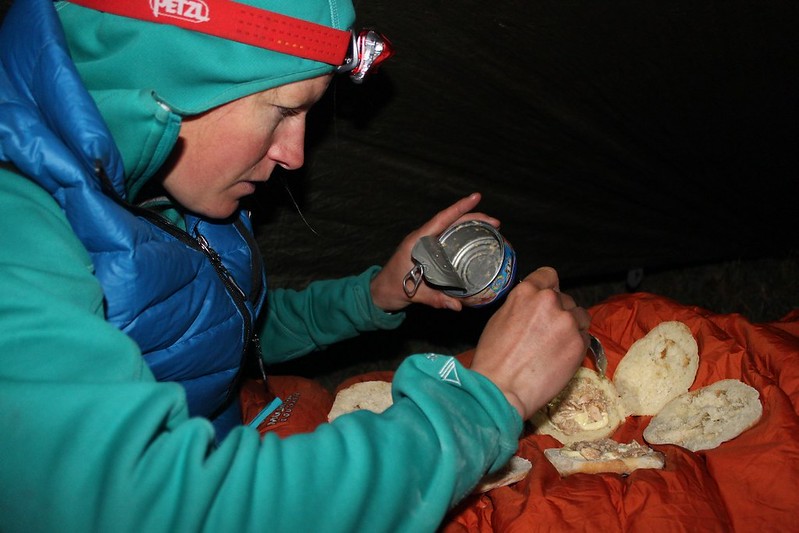 Light setup = no stove. Delicious tuna sandwiches replaced the usual pasta dinner. We were pretty bored of bread by the end of the week. 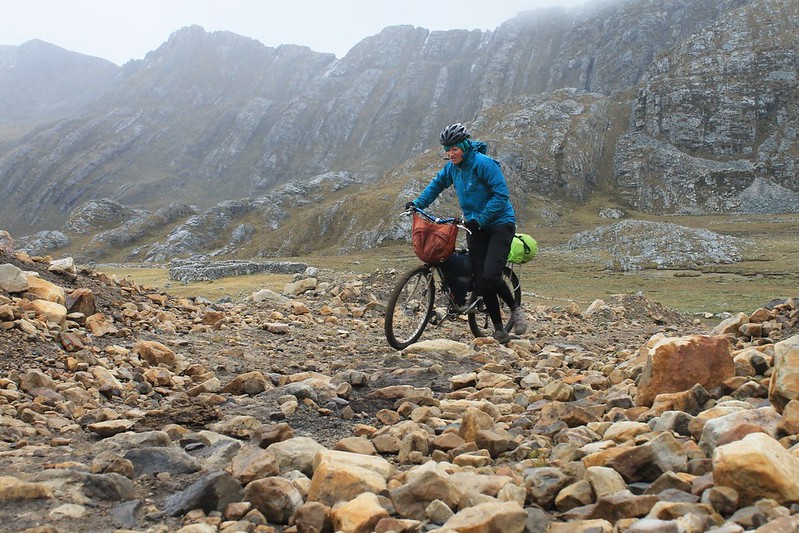 Nearing 4,600m Abra Contonga. After the pass was a short section of uncompleted road, which explained why the previous afternoon we’d only been passed by poncho-ed horsemen, rather than the usual fleets of Hiluxes. 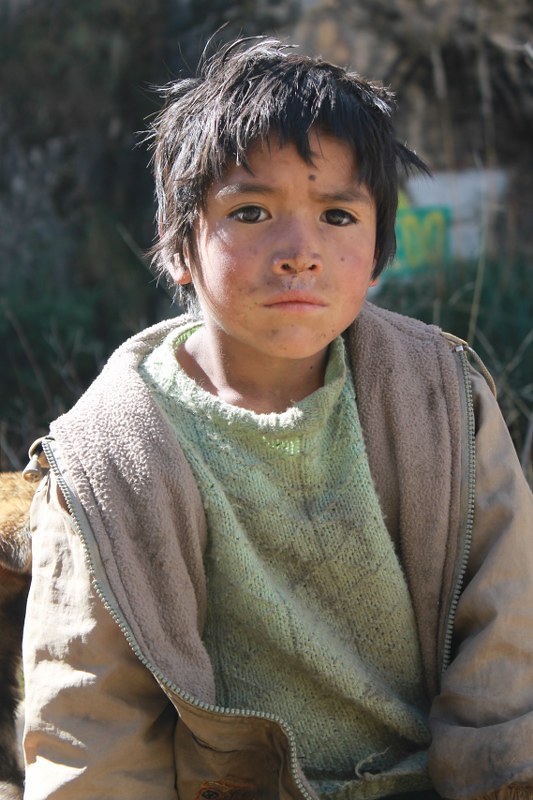 A young shepherd near Huallanca. Watching him trying to herd his flock across a wooden bridge was the highlight of our day. Sheep can be quite stubborn, given the chance. 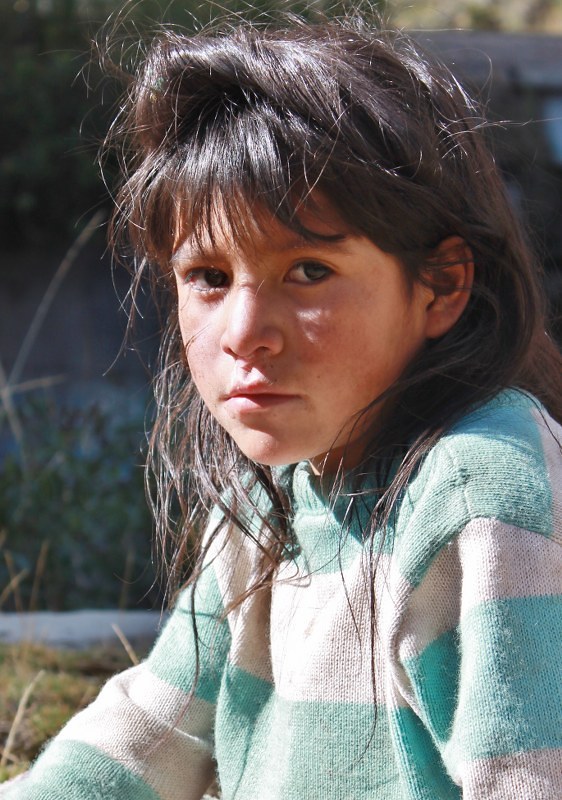 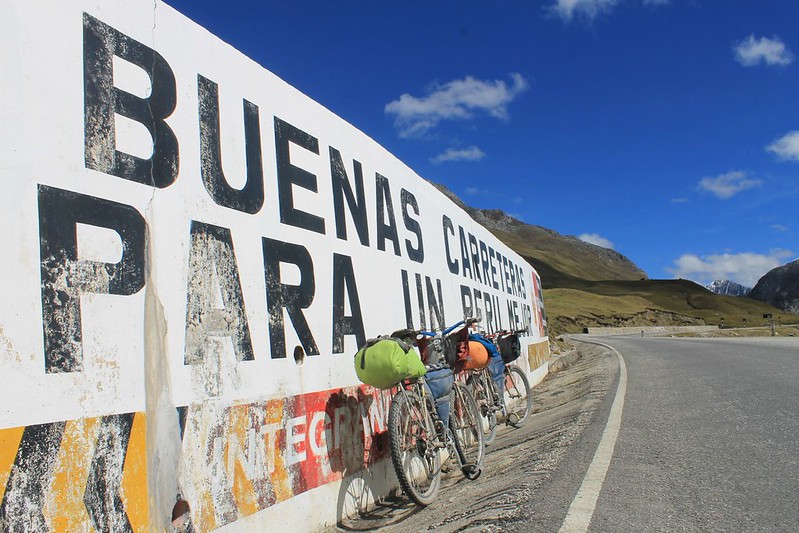 ‘Buenas Carreteras Para un Peru Mejor’. Peru has a strange appetite for political graffiti. Usually it’s houses splashed with party logos or politicians’ names. I can’t remember who was claiming credit for this lovely paving above Huallanca. They’d painted a big old sign about it though. 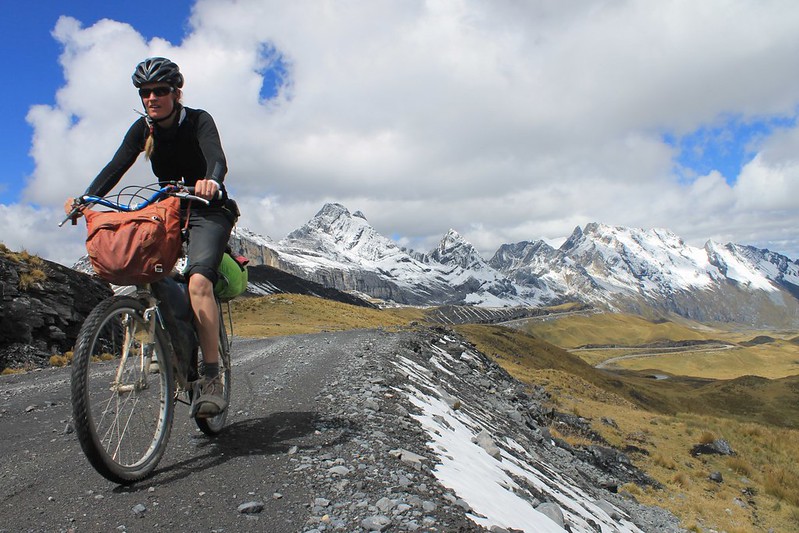 Back on the ripio and the road over Huamanripa and Huarapasca to Carpa. If you’re in the area, you could do far worse than pedal this way. It’s a good’un. 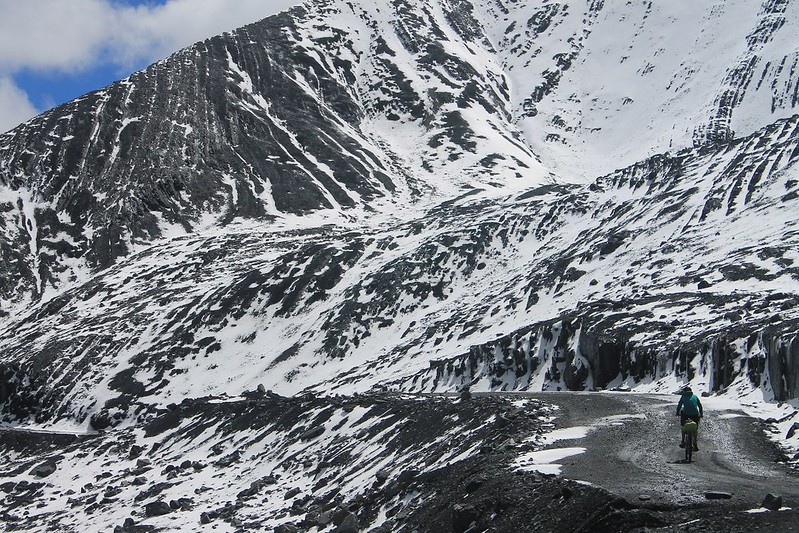 Particularly after a fresh covering of snow. 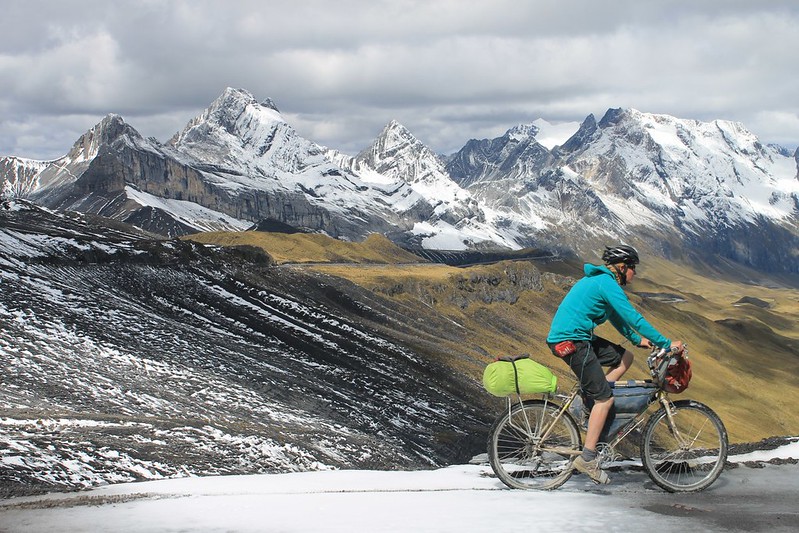 …making all those Cordillera Huallanca peaks whiter than usual. This range tops out at about 5,300m, so not much permanent snow on display. 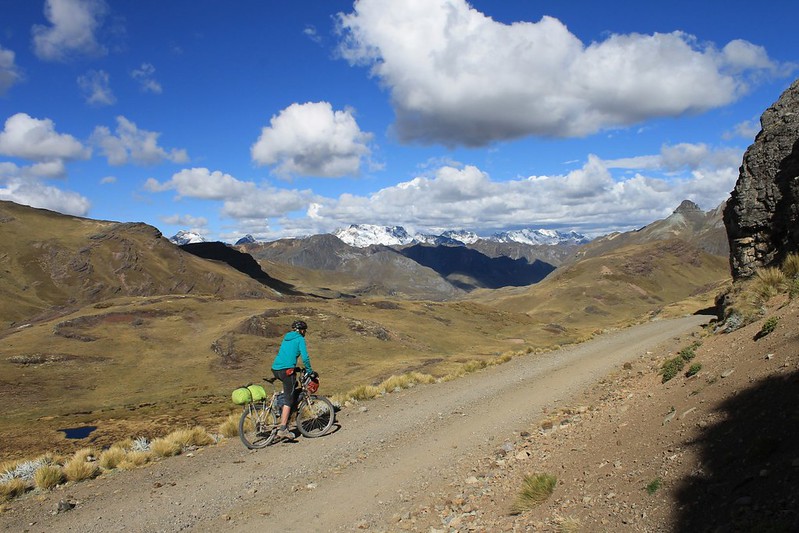 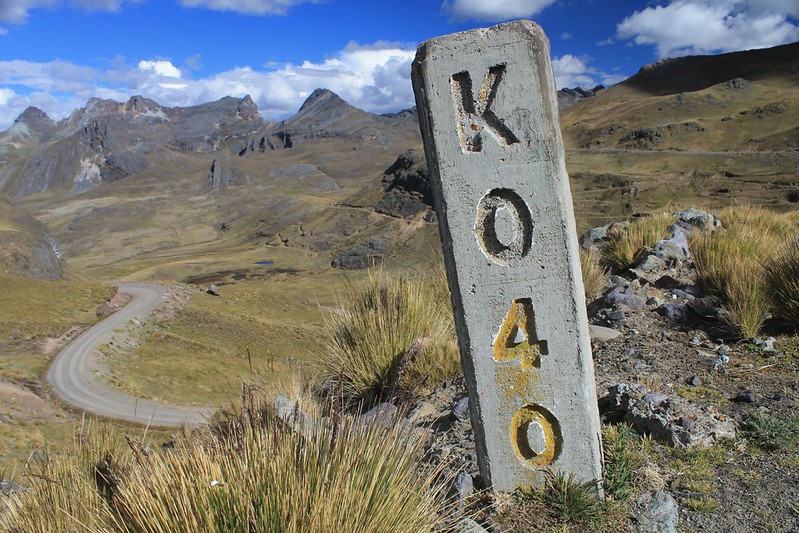 40km of quiet dirt to enjoy before the paving begins again. 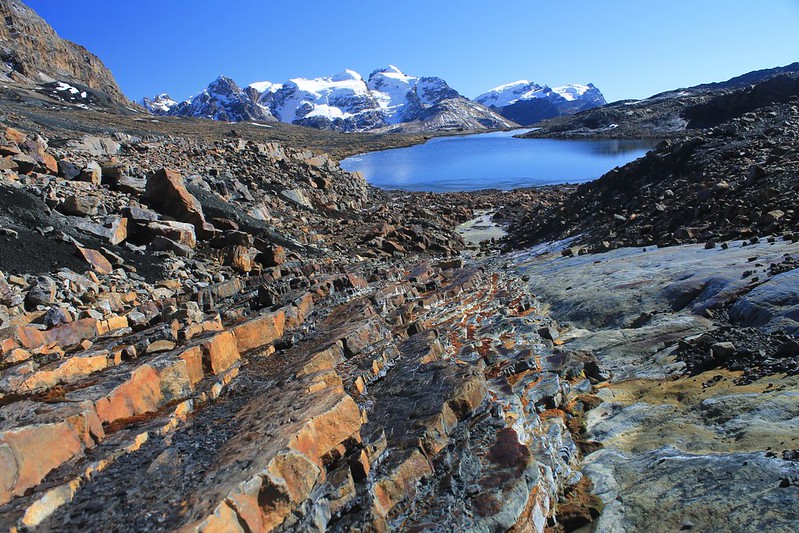 A swift detour to camp at Pastoruri. The road ends at 4,950m – as far as we know it’s the highest in the Cordillera Blanca. 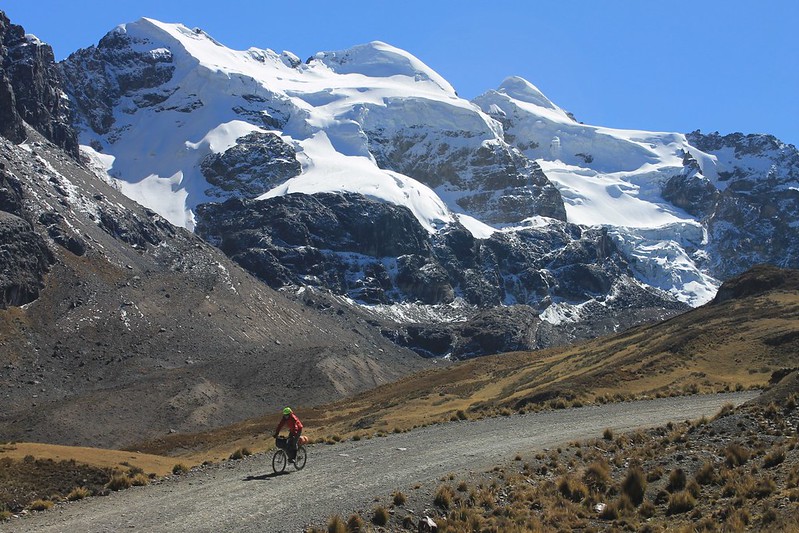 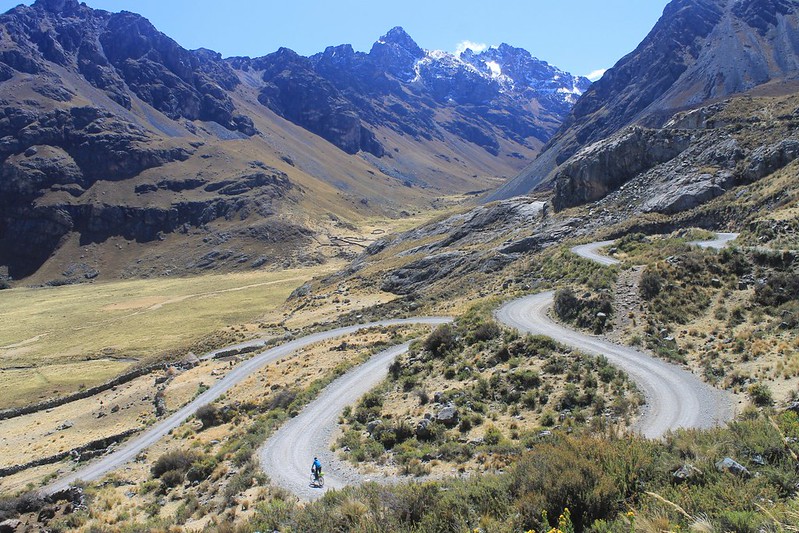 A sinuous section before we reach the Puya Raimondii. 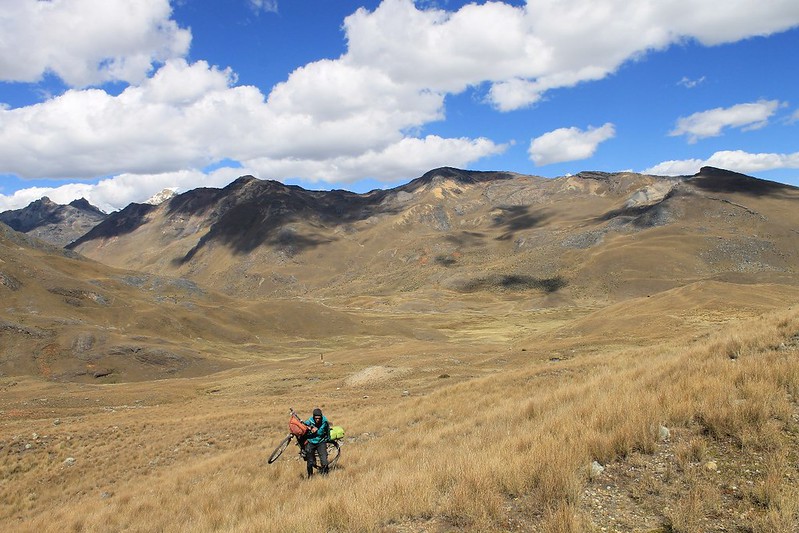 And then we head off-road again. On Google Earth the terrain looks easy, and herein lay the problem. Gentle slopes = cows can go anywhere = no paths = slow going. 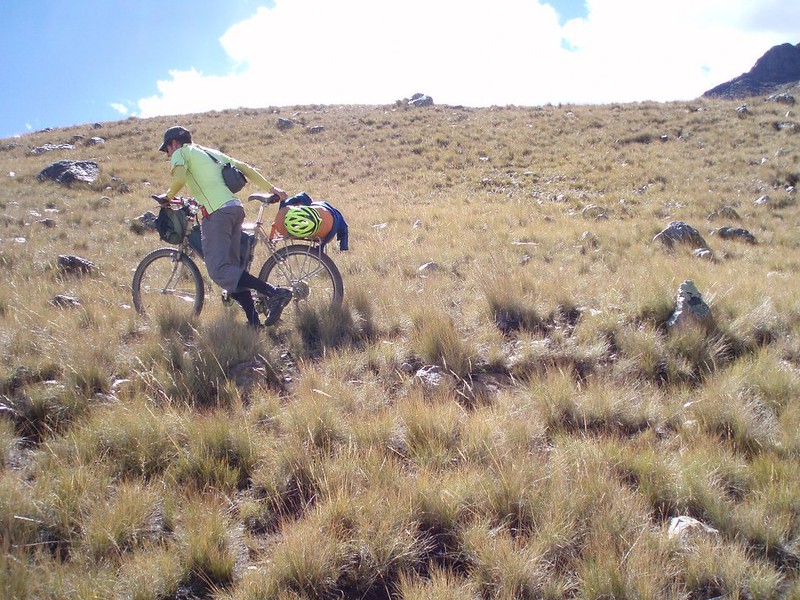 To carry or to push? Carrying is quicker, but the 25kg bike kinda breaks your back. 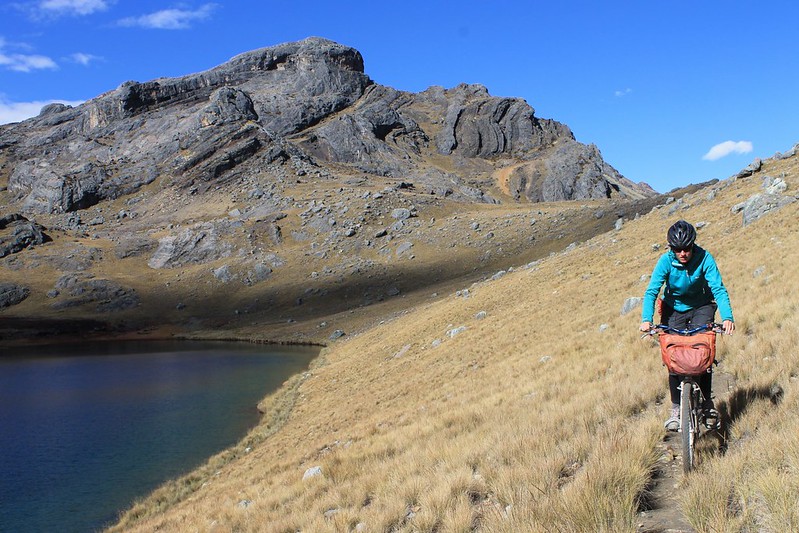 Riding again, past Acococha’s tranquil lakes. Then came an after-dark dash back from Catac to Huaraz on the main road. Won’t be repeating that again.

And then into Quebrada Rajucolta… 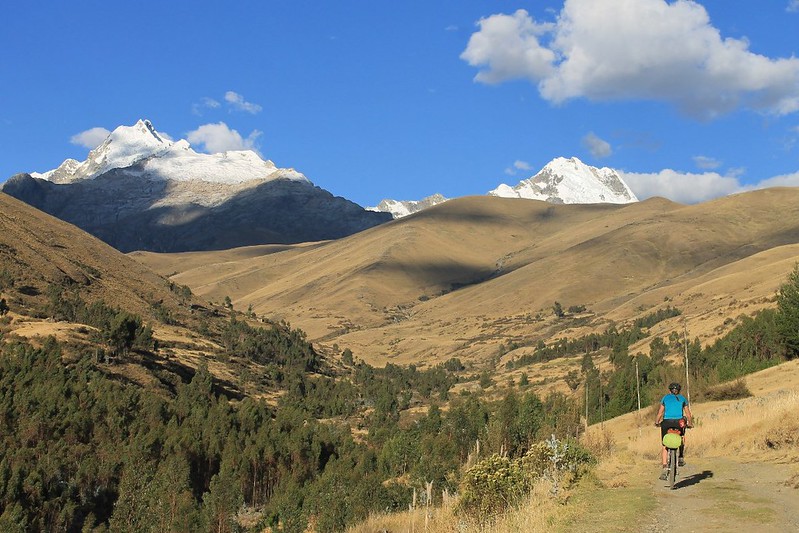 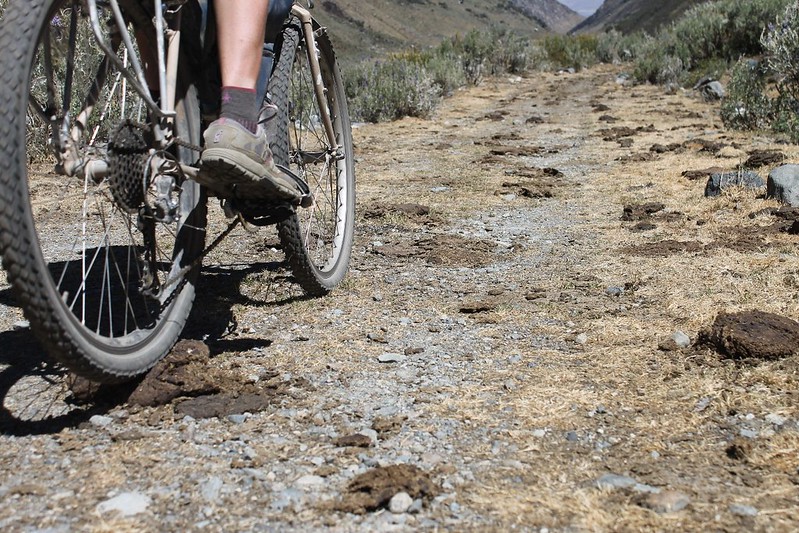 Throo the poo. Well, that’s what I was expecting when I set up the shot. The pat was firmer than expected. 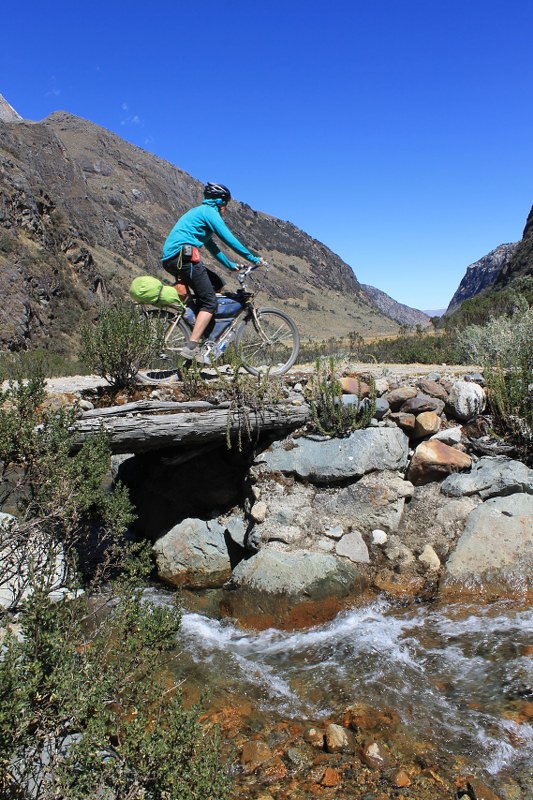 Cycling out of Quebrada Rajucolta. 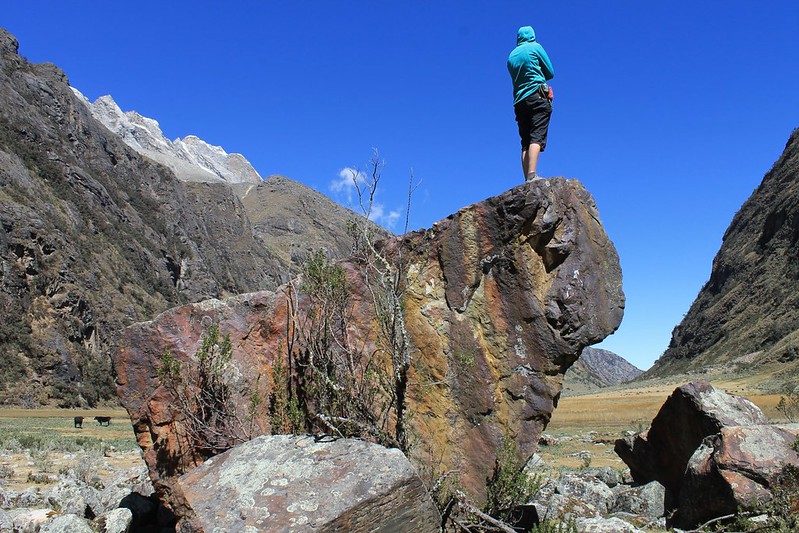 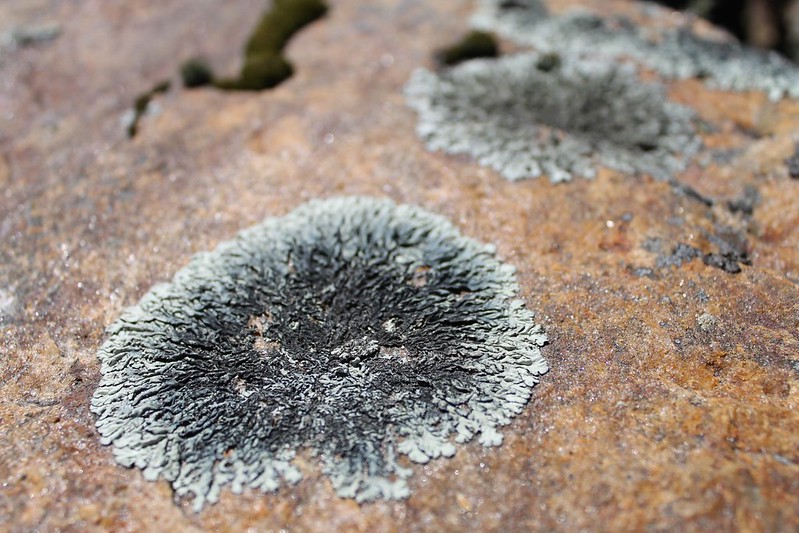 Some lichen to evidence the nice clean air up in these quebradas. 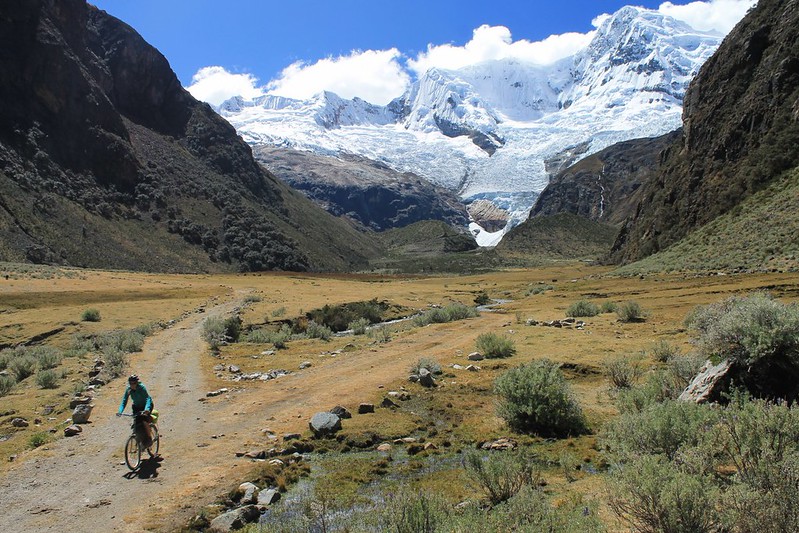 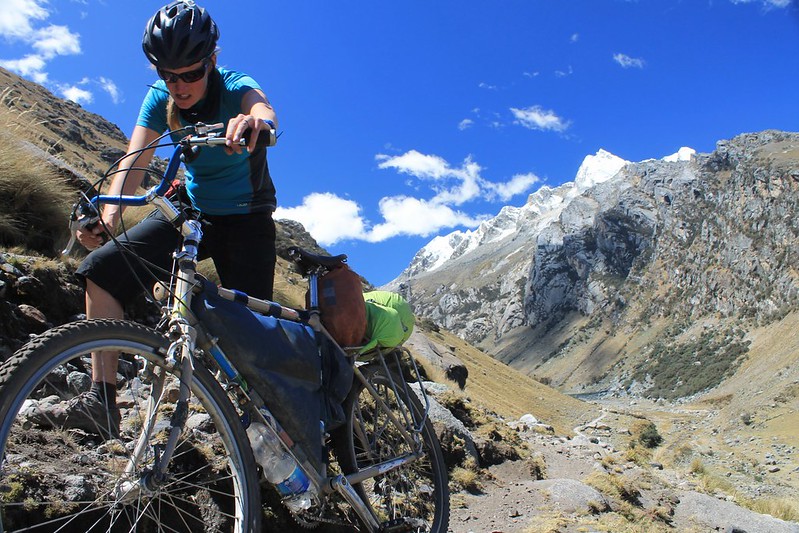 Then we detour off road again. Pushing out of Quebrada Rajucolta and into Quebrada Shallap. 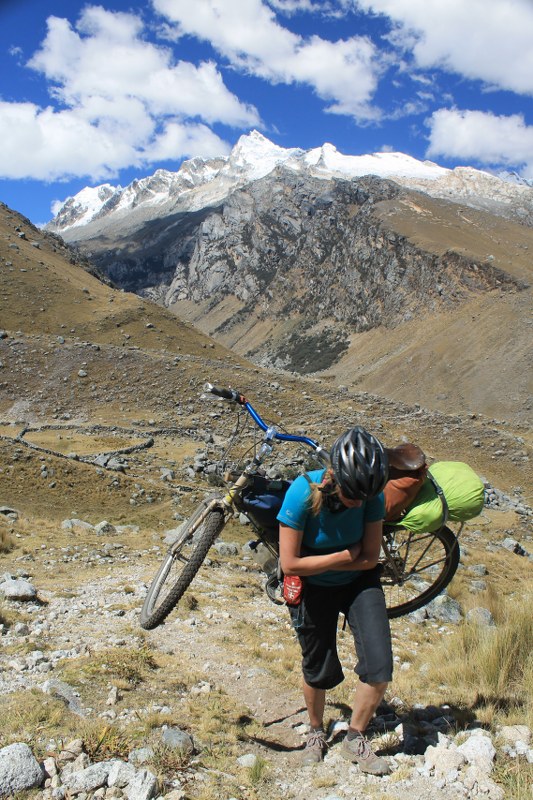 The going gets a bit trickier; the pushing becomes a carry.

11 thoughts on “Bikepacking in the Blanca”