We love this country, (in no small part because of the warmth and love you get from the people) which is why we’ve spent more time travelling here than anywhere else. But for a place so rich in natural resources it saddens us to see how political mismanagement can so adversely affect a nation’s fate.

It’s been interesting comparing the fortunes of the various Andean nations between our 2010 and 2013 trips. Peru is the most noticeably changed – it’s going places. Many Bolivians’ standards of living are clearly improving. Argentina is going backwards*. In the two months between us entering and leaving the country, the Argie Peso lost over 30% against the dollar – the economy is surely heading for another of its periodic crashes. Talk to most locals about the situation though and the usual response is either a heads-in-sand ‘people have been saying the economy will crash for years‘, or just a shake of the head and a resigned ‘that’s our corrupt politicians for you‘. What can the little man do?

Ironically as we headed west over Paso Agua Negra to Chile we were passing through roadworks. The first investment in infrastructure we’d seen in two months. A tunnel is due to built under this pass, though we won’t be surprised if the cash runs out (or is diverted to pockets) when there’s only 10m of rock to drill through to reach the Chile border…

*Maybe this is just because we choose to spend most of our time in Catamarca and La Rioja, two of the country’s poorest provinces, though we don’t think so. 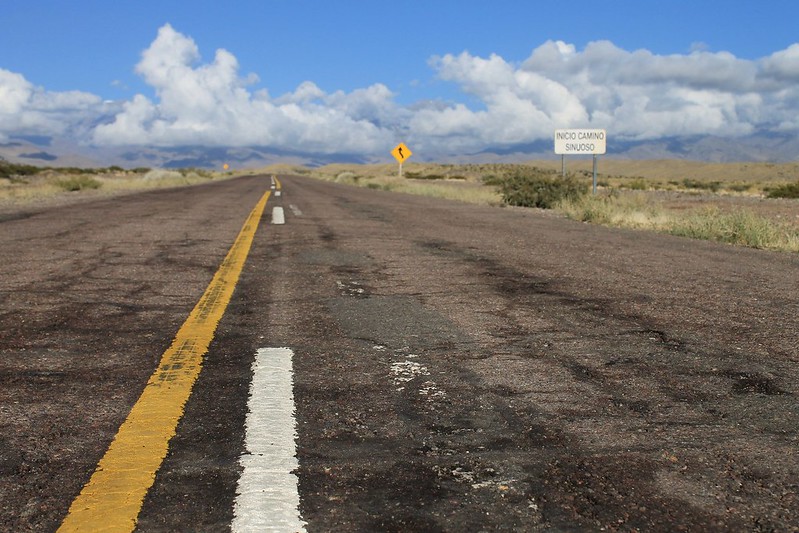 Much of the Argentine side of Paso Agua Negra is paved. But it’s old paving, with lots of patches. 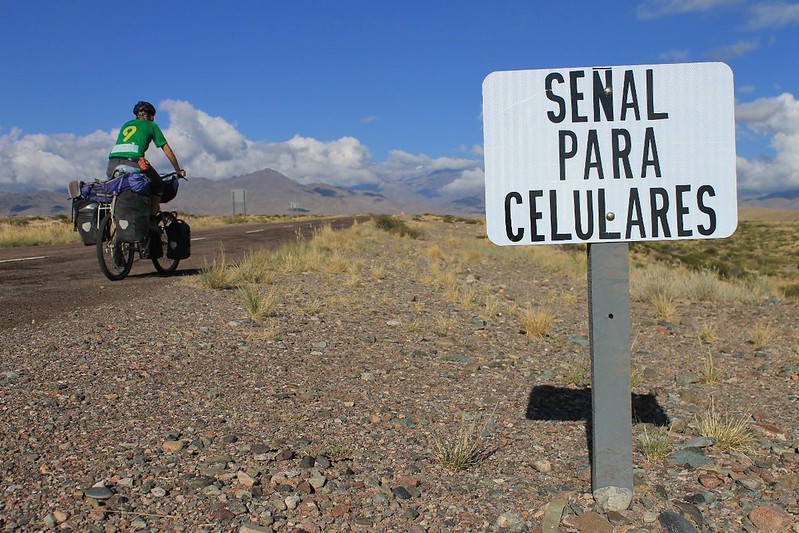 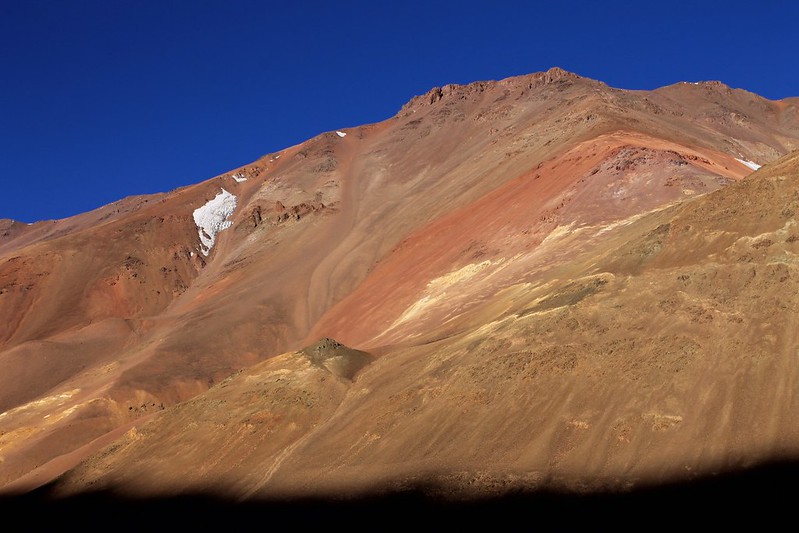 Our second camp on the route is at 4300m. At dusk the sun turns the hills these fabulous colours. 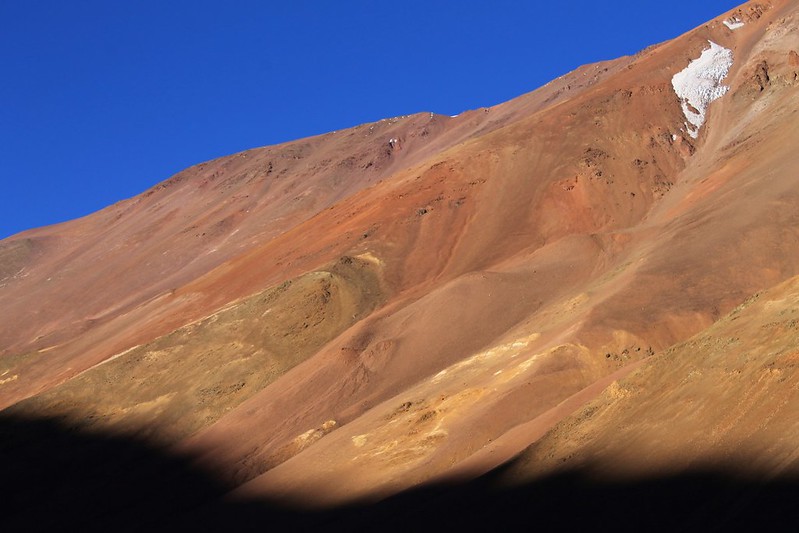 …which makes it all very reminiscent of the equally dramatic Pircas Negras road. 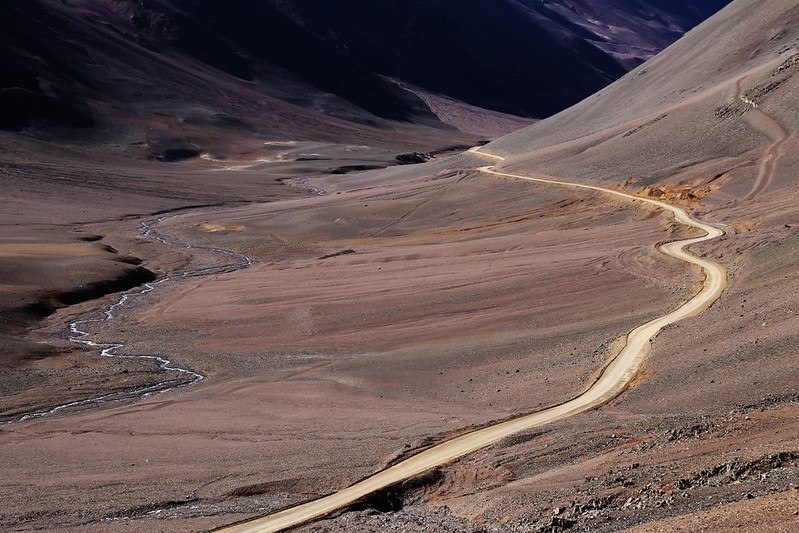 The ribbon of ripio winds its way up valley… 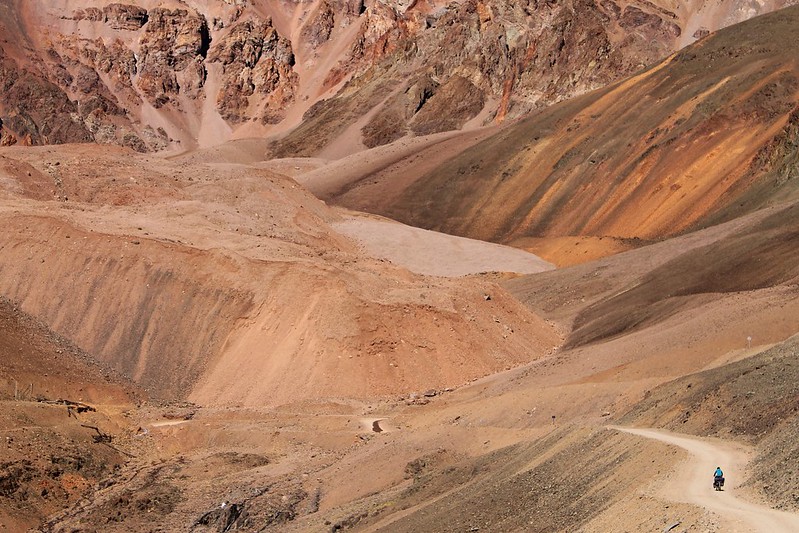 …and we’re made to feel small by the towering hillsides. 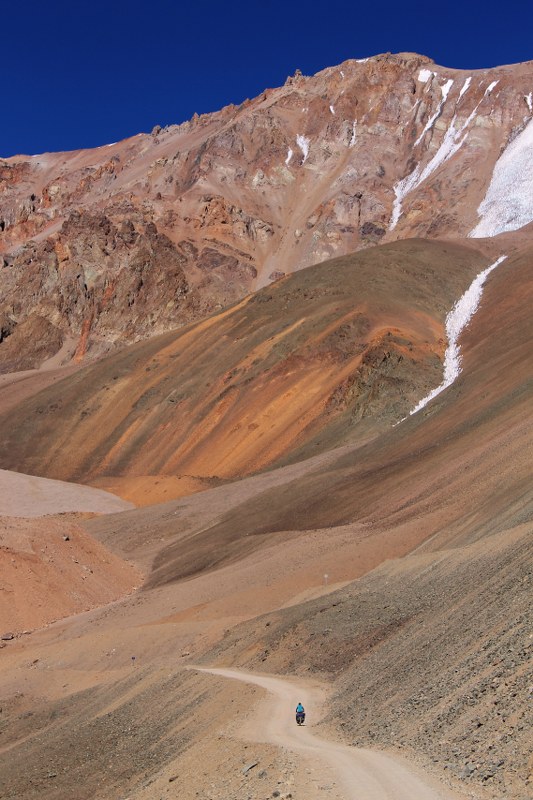 6200m Olivares is to the south of the pass. We somehow manage not to see it… 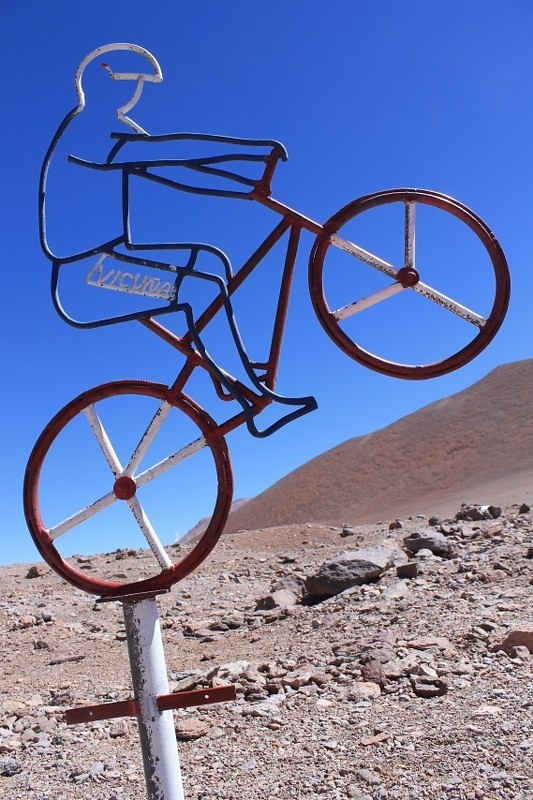 The 4770m pass is marked by numerous signs and plaques. And also this excellent sculpture. 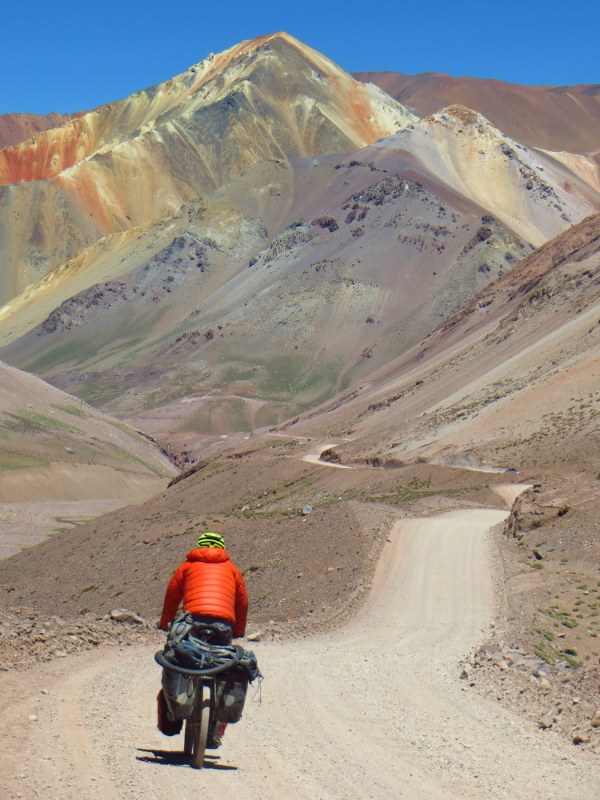 Then comes the descent, one of the longest in the world. It’s just as colourful as the climb. 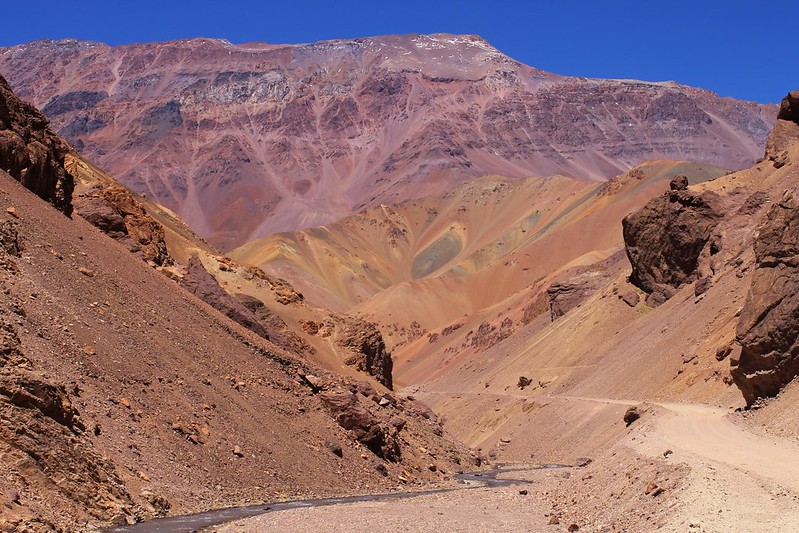 Perhaps even more so. 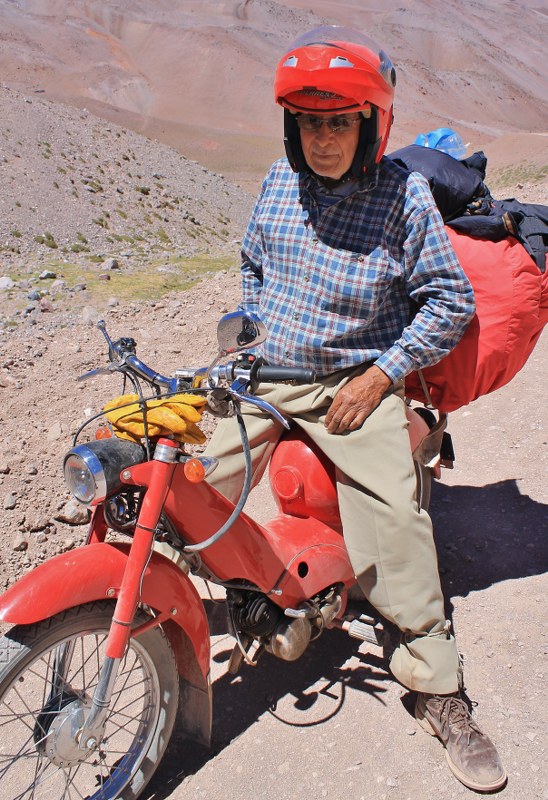 As we freewheel down, we meet Wilson. Aged 72 he’d cycled over Paso Agua Negra from Argentina to the sea in Chile, had his long hair cut there, then cycled back. Now, aged 75, he’s doing it on a 50 year old Italian motorbike he’s restored. Legend. It and he were both struggling. 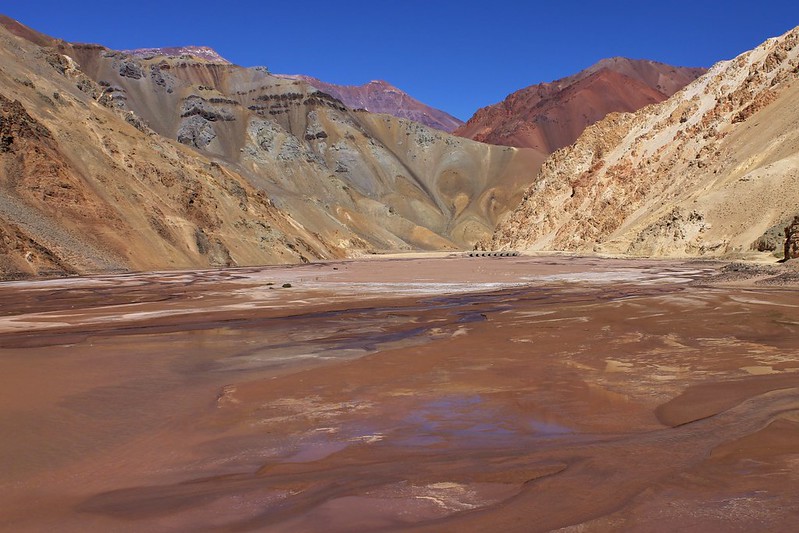 A tunnel is due to be built under the pass, so there are roadworks on both sides. It doesn’t affect the quality of the surface in Argentina, but in Chile, near this lake, there are a few rough kilometres on loose gravel. 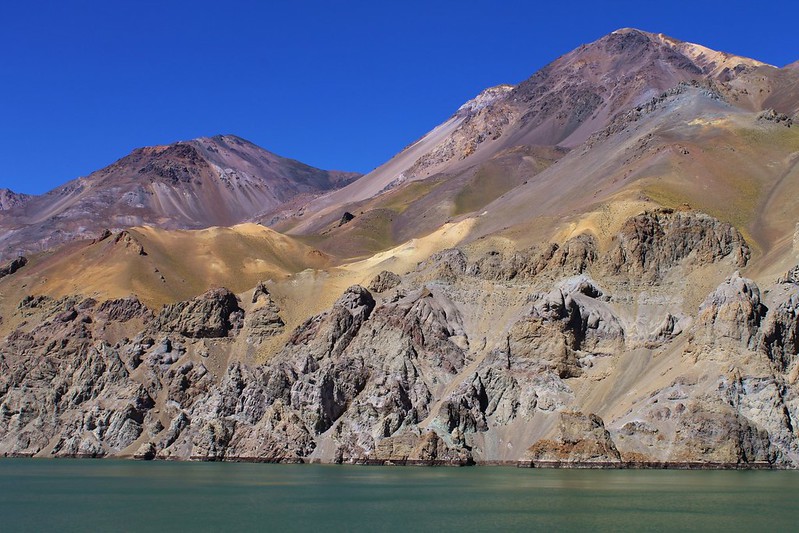 This is La Laguna, above the Chilean customs post. Not sure what genius came up with the name. 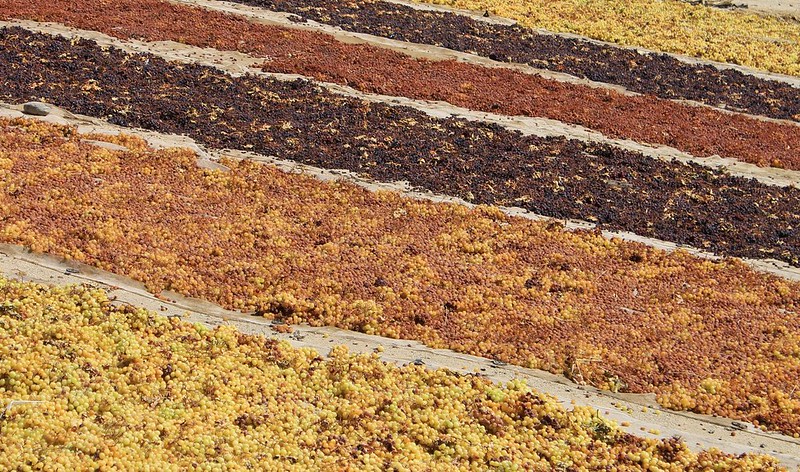 The first village in Chile is Huanta, at a lowly 1200m. Here the vineyards appear. These are rows of grapes, drying in the sun. 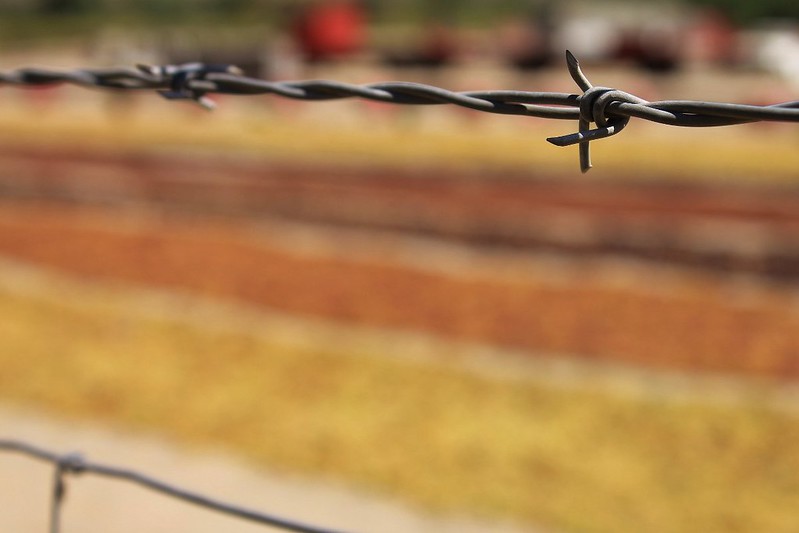 This being Chile though, they’re behind a barbed wire fence. They can’t get enough of their fences in this country. 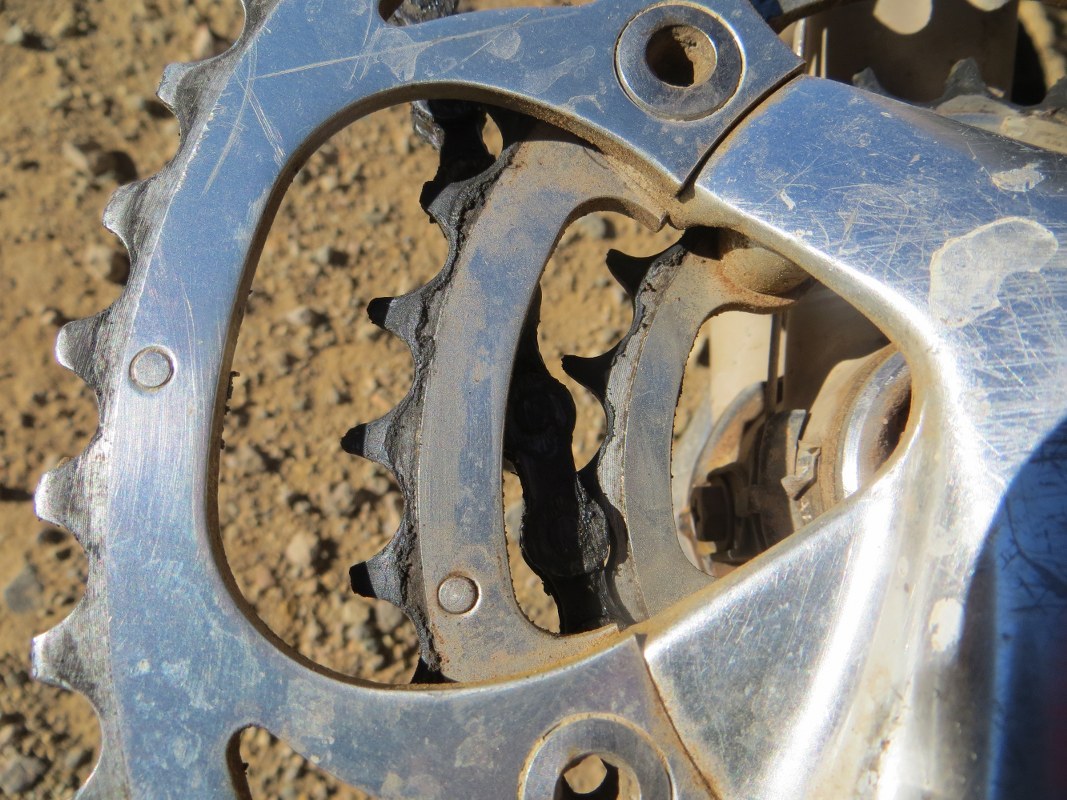 Guess who’s been cycling in the Andes? That small ring beginning to look a bit worn… 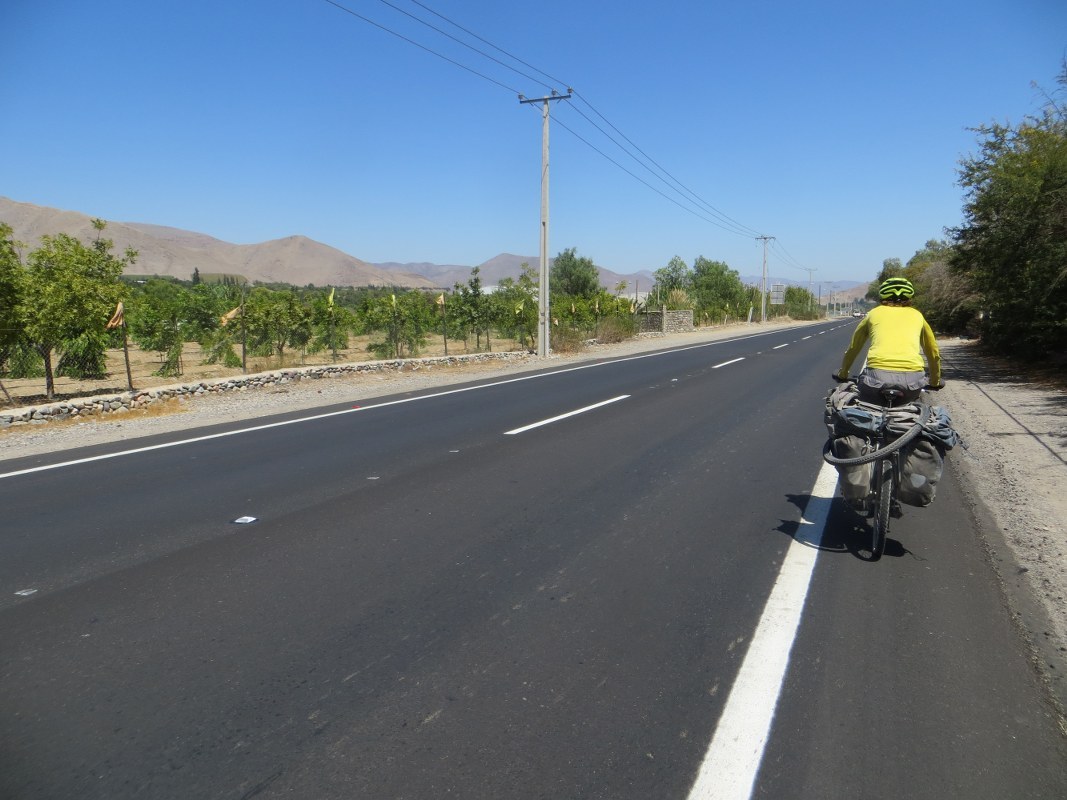 After the customs post, the paving begins. We’d hoped to cycle all the way to La Serena and the sea, but by the time we reach Vicuña the road is already far too busy for our liking, so we jump on a bus to La Serena. This is just the start of a 3400km, 6 bus, 83 hour epic journey back to Huaraz. (Note to cyclists: the Panamerican Highway between La Serena and Lima is possibly the dullest road you could ever dream of riding. Lots of dangerous traffic on some sections too. Avoid! Avoid!)